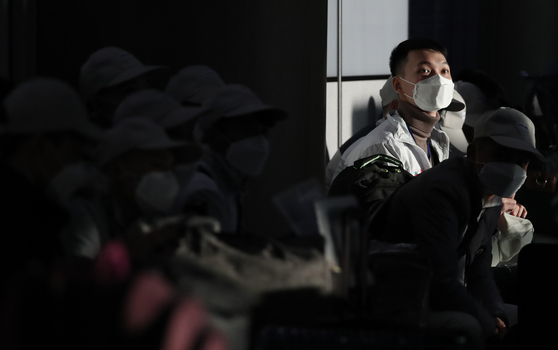 Vietnamese people entering the country for work wait for a bus at the arrival terminal at Incheon International Airport on Dec. 3. The workers were transported to a location where they were quarantined for 10 days as the Covid-19 variant Omicron emerged. [YONHAP]

Foreign workers are getting back to work as the overall job market improves, at least according to statistics from earlier this year.

The unemployment rate dropped 1.6 percentage points to 6 percent as the number of unemployed foreigners fell 15,000 on year to 54,000.

For the purposes of these statistics, naturalized Koreans are considered foreigners.

A total of 31,000 of naturalized Koreans were employed in May, 3,000 more than in the year-earlier period, raising the employment rate 4.5 percentage points to 63.6 percent.

According to the statistics agency, 1.33 million foreigners 15 or older were staying in Korea last May. This excludes those with permission to stay of 90 days or less.

A total of 49,000 people were naturalized in the last five years.

"The number of people employed has been increasing since March, which also improved the employment situation of foreign job seekers," said Kim Kyung-hee, director of employment statistics at the agency. "There has been an increase in the hiring of foreigners in construction, which has a relatively high ratio of foreign employees."

Foreigners employed in construction increased 19.4 percent, or 17,000. Those working in agriculture and fishing increased 7.2 percent, or 4,000 more.

Covid-19 and its influence on manufacturing, which is struggling from supply bottlenecks, had an impact on the employment of foreigners in the country.

The number employed in manufacturing and mining fell 9,000, down 2.4 percent, and in wholesale, retail, restaurants and hotels, the total dropped by 3,000, or 1.7 percent.

Border restrictions also affected the employment of non-Koreans as those in non-skilled positions had a more difficult time getting in.

Of the foreigners in Korea, 74.1 percent earned more than 2 million won ($1,670) a month, up 6.6 percentage points; 34.2 percent of foreigners living in Korea earned 2 million to 3 million won a month in the 12 months through May.

Of the naturalized Koreans, 31.6 percent had no income.

For the average foreigner in Korea, 41 percent of income was used for living expenses, and 22 percent was sent to their home countries.

Excluding F-5 permanent residency visa holders, 88.2 percent of foreigners said they would like to extend their stay, which is up 1.7 percentage points on year.