Polestar opens a showroom and promises cars in January

Polestar opens a showroom and promises cars in January 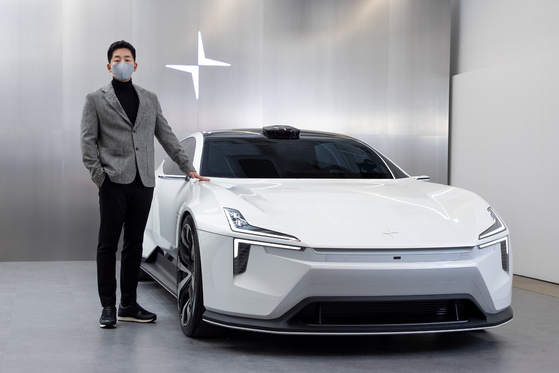 
Polestar will commence sales in Korea next January and aims to introduce at least one new electric vehicle (EV) model a year through 2026.

The Gothenburg, Sweden-based automaker on Tuesday said the Polestar 2, its all-electric hatchback, will be sold in Korea starting Jan. 18.

"We plan for the cars to be delivered sometime after mid-March," said Lee Se-min, head of commercial operations.

The Polestar Precept was introduced at Destination Seoul, its first Korean showroom, which opened Tuesday at Hannam-dong, central Seoul. The vehicle is a concept car and will be available in 2024 as Polestar 5. It will be exhibited at the venue for a week.

The all-electric Polestar 3 SUV will be sold next year, and the Polestar 4 will be available in 2023.

"With our strong founding parent companies, Volvo Cars and Geely Holding, we have direct access to the expertise and economies of scale needed to deliver quality products, with established processes, support and networks already in place," said Thomas Ingenlath, CEO of Polestar, via video message at the event.

Polestar is a joint venture established in 2017 between Volvo Cars and its Zhejiang, China-based parent company Geely Holding. Polestar Korea was established as a wholly owned subsidiary in March.

Customers who buy the Polestar cars will be able to have their vehicles checked and serviced at 31 Volvo service centers across the nation.

Polestar said the roll out of Polestar 2 will not be affected by the chip supply shortage.

"The chip supply issue that all manufacturers are dealing with was also evident at Polestar in 2020," said Kim Nam-ho, head of pre-sales. "However, all problems were solved ahead of our Korean sales slated for 2022, and we are certain there will be no chip supply issues for cars sold in Korea."

A spokesperson for the company said it has been planning for sale of Polestar 2 since last year, and was able to source sufficient components.

Ahead of sales, the company announced it will spend 50 billion won to open various showrooms and "retail touch points," places where cars are stocked and people can go for test drives.

Its second showroom, Space Gyeonggi, will open Dec. 31 at the Starfield Hanam, a shopping complex in Gyeonggi. Its Space Busan showroom will open at the Centum City mall in Haeundae District, Busan, on Jan. 19 next year. Destination Jeju is expected to open on the island next March.

Seven retail touch points will be built in major cities in Korea in 2022. Another three will be added by the end of 2024.

Polestar's showrooms don't sell cars but allow customers to see the vehicles, be briefed about them from "Polestar Specialists" and take test drives.

Orders can only be made online, and the company said it partnered with a financial firm, unnamed, to offer safe online payment services. It also has plans to work with local companies in battery and chips in the future.