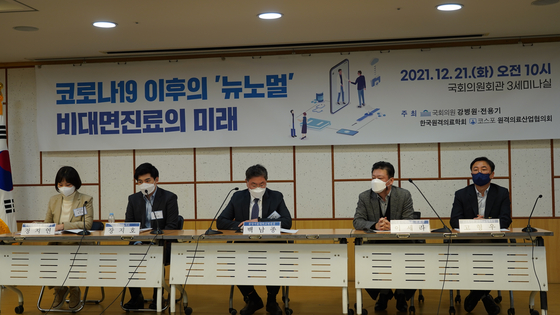 Experts discuss how telemedicine could be legalized in Korea during a parliamentary seminar held at the National Assembly, southern Seoul, on Tuesday. [TELEMEDICAL INDUSTRY COUNCIL]


The Ministry of Health and Welfare says it recognizes the need to legalize telemedicine in Korea and will start by studying related laws in other countries, a ministry official said in response to requests to fully legalize the practice at a parliamentary seminar held Tuesday.

"We will work to design a set of policies that benefit the people, the medical field and the industry as a whole," said Koh Hyung-woo, director at the division of healthcare policy at the health ministry.

Telemedicine, the use of technology to remotely diagnose and treat patients, has been temporarily authorized since Feb. 24, 2020, when mass infections were first reported in Korea at the beginning of the Covid-19 pandemic.

The Ministry of Health and Welfare started allowing people to get diagnosed and prescribed medicine over the phone, and also for family members on the behalf of others if they can prove their relationship with legal documents. Medicine can also be delivered to doorsteps if patients pay the delivery charge.

There are no specific restrictions on what kind of patients are eligible for telemedicine. A guideline released in March 2020 only states that a doctor decides whether it is safe for the patient to be diagnosed remotely or not.

Since then, over 3 million diagnoses have been made through the phone, and the number is growing at a faster pace than last year, according to Paik Nam-jong, the president of the Seoul National University Bundang Hospital. 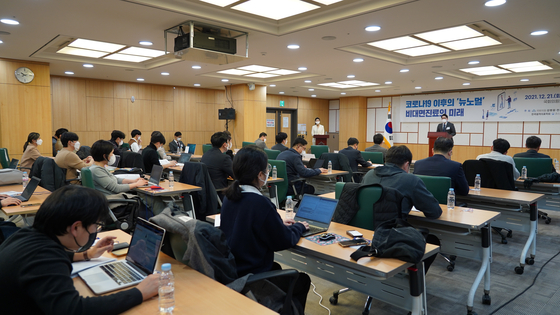 A parliamentary seminar on telemedicine is held at the National Assembly, southern Seoul, on Tuesday. [TELEMEDICAL INDUSTRY COUNCIL]


"Gangwon Province did partly allow telemedicine in 2019, but the health ministry took a conservative stance and said it had nothing to do with the regional government's decision," Paik said. "That's probably because doctors are strongly against telemedicine, and any action taken for it arouses fierce opposition."

According to a survey conducted by the Korean Physicians' Association, 25 percent of doctors were strongly against telemedicine and said they will not be practicing medicine unless face-to-face with a patient, while 9 percent said they are willing to try it out. The rest said they will see how the market develops and decide later.

"Most doctors are worried that if they make a misdiagnosis, they will be held liable to the consequences, while the economic incentives to them practicing telemedicine are so low," said Oh soo-hwan, CEO of telemedicine app MDtalk and also a dentist.

"But of the 3 million diagnoses, not one misdiagnosis has been reported yet. This doesn't mean that it won't happen in the future, but it does mean that it's not as dangerous as people imagine."

Currently for patients, the cost of actually going to a hospital and speaking to a doctor by phone is the same, except for the delivery cost of the medicine. As for the doctors, they get a 30 percent bonus from the government as an encouragement to practice more through the phone. But it's not enough to persuade them, says CEO Jang Ji-ho of Doctor Now, a telemedicine platform app.

"Doctors say it takes them longer time to make a diagnosis because they can't see the patients for themselves and they have to be careful not to make a mistake," Jang said.

"But there are ways to make the transition easier, such as making it mandatory for the patient to visit the hospital for the first time then talking over the phone for future treatments. If we work through the hiccups, we can quickly take the lead in the telemedicine market using both Korea's finest IT and medical technologies."

The fastest way that the government could encourage doctors is through financial support, said Lee Sehra, vice president of the Seoul Medical Association.

"Doctors all agree that telemedicine has the potential to advance the Korean medical industry — the problem is whether doing so does not harm them," Lee said. "Medicine has a public aspect to it, but doctors also have to make a living. If the health ministry rewards doctors more, then that will be the beginning of the whole process."