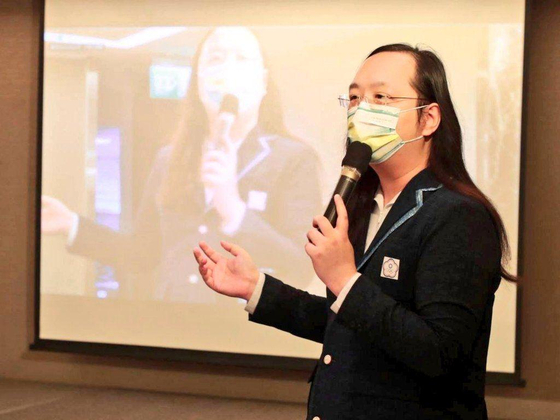 
The Taiwan Foreign Ministry on Monday protested Korea’s decision last week to cancel its invitation to Digital Minister of Taiwan Tang Feng to speak at a forum on the fourth industrial revolution.

"The Ministry of Foreign Affairs has summoned the acting representative of the ROK [Republic of Korea] Representative Office in Taipei to express strong dissatisfaction with the disrespectful behavior of the ROK," the Taiwanese ministry said in its statement on Monday. "Taiwan is a sovereign and independent country and has the right to conduct exchanges and deepen exchanges with other countries in the world."

Minister Tang, who also goes by Audrey Tang, was scheduled to speak at the Global Policy Conference on the 4th Industrial Revolution hosted by Korea’s presidential committee on the fourth industrial revolution last Thursday.

According to the Taiwanese Foreign Ministry, Minister Tang was informed of the cancellation “early in the morning” the day of the conference.

“Ambassador Tang Dianwen of the [Taipei Mission] in the ROK has also simultaneously expressed to the ROK the solemn protest of the Taiwan authorities,” the statement said.

Korea’s reason for the abrupt cancellation was “various aspects of cross-Strait issues,” according to a report by the Central News Agency in Taiwan on Monday. The agency quoted the Taiwanese ministry’s spokesperson Joanne Ou, who cited an email sent to Tang’s office from the conference organizers.

"Cross-strait issues" refers to Taiwan-China relations. The last time the Taiwan Strait was mentioned in the U.S.-Korea joint statement following the summit in May, the Chinese Foreign Ministry’s spokesman told the two countries to “refrain from playing with fire.”

When asked about Tang's cancellation and Taiwan’s protest, the Korean Foreign Ministry said on Tuesday that there is no change in the government's position in that it "will continuously promote informal and substantive exchanges with Taiwan."

“I understand that the issue of Taiwan's participation in the policy conference was decided after a comprehensive review of the circumstances,” Choi Young-sam, spokesperson of the ministry, said in a regular press briefing at the ministry headquarters in Seoul on Tuesday. “In this regard, the basic position of the Korean government to continuously promote informal and substantive exchanges with Taiwan has not changed.”

Minister Tang was formerly a software programmer and became the first transgender official to assume a minister-level position in Taiwan in October 2016.

Tang was also a speaker at the Joe Biden administration’s virtual Summit on Democracy, which was denounced by the Chinese Foreign Ministry as an attempt by the United States to “draw lines of ideological prejudice, instrumentalize and weaponize democracy.” 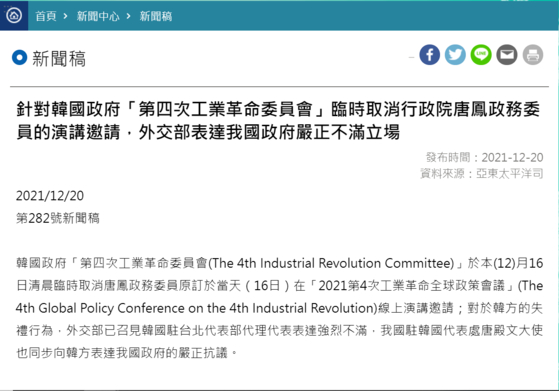 The Taiwan Foreign Ministry's statement on Monday protesting Korea’s decision last week to cancel its invitation to Digital Minister of Taiwan Tang Feng to speak at a forum on the fourth industrial revolution. [SCREEN CAPTURE]

Korea and the fourth industrial revolution <1-1>