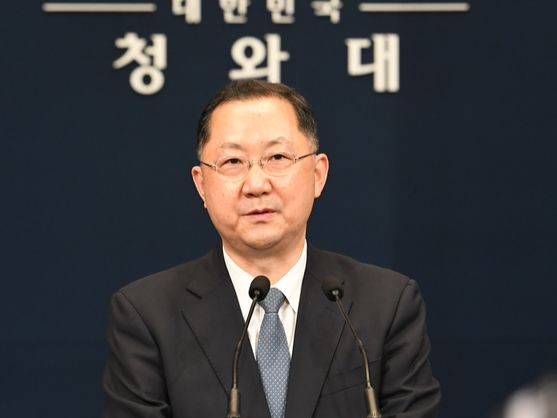 Kim Jin-kook, pictured in a press conference in March, stepped down as senior presidential secretary for civil affairs Tuesday after his son was found to have used his father's name in multiple job applications. [JOINT PRESS CORPS]

Kim Jin-kook, the senior presidential secretary for civil affairs, resigned Tuesday after his son was revealed to have leveraged his father's position in multiple job applications to try to get employed.

The secretary tendered his resignation as soon as he arrived to work Tuesday morning, and President Moon Jae-in immediately accepted it, a senior Blue House official told reporters. Kim later that day issued a public apology and said he would take responsibility for his son's misconduct.

The resignation came less than a day after broadcaster MBC first reported Monday evening that Kim's 31-year-old son had touted his father's name in résumés recently submitted to five companies in his job application process.

In one application to a consulting firm, the son wrote in his cover letter in the section describing his growth process, "My father is Kim Jin-kook, senior secretary for civil affairs."

He added, "My father will provide a lot of help." When asked to describe his strengths and weaknesses, he wrote that he will ask his father to "help achieve this company's dreams."

He continued, "Trust me, I don't lie," then went onto ask the company to "help me spread my wings here."

Kim's son submitted similar résumés to other companies. All the companies reportedly got in touch with him, some to confirm whether or not he really was the secretary's son, surprised at how blatant the content of the application was and suspecting impersonation.

The son also was confirmed to have lied on his résumé that he graduated with a degree in sports coaching from Gyeonggi-based Yong In University in March 2018, when he had actually transferred to another university and later dropped out of that school.

The son withdrew the résumés and said he did not undergo any job interviews at these companies. He eventually was employed by a separate IT company, who reportedly didn't learn who his father was until he was accepted to the job.

"I must have been out of my mind," the son told MBC. "I shouldn't have done that, I'm really sorry. I just really wanted to get a job."

Secretary Kim said Monday that his son had been receiving treatment for anxiety and obsessive-compulsive symptoms.

The Blue House official said, "It was confirmed that Secretary Kim did not intervene in his son's job application process."

"I deeply apologize for causing concern to the people," said Kim in a press conference Tuesday afternoon. "I was lacking something as a father. I believe that my son's inappropriate conduct was entirely due to my negligence. I have always thought that public officials who serve the people should not have any misunderstandings or suspicions in relation to their family members."

He said he thought it would be "right to take responsibility if there was even the slightest shame."

Kim added that despite his departure, he hopes that the Moon Jae-in government's "will for and effort toward justice and fairness will be fully appreciated by the people," adding he is sorry that he is not able to "protect the president till the very end."

Ruling Democratic Party Rep. Jun Jae-soo later shared a Facebook message from Kim's older brother, who described that his nephew had been suffering from schizophrenia since high school and had been "unable to have a normal social life" because of frequent hospitalizations over the past 15 years.

Kim, a former official at the Board of Audit and Inspection, was appointed as Moon's fifth civil affairs senior secretary in March after the resignation of Shin Hyun-soo, a former prosecutor who had protested prosecution appointments led by Justice Minister Park Beom-kye and had been just three months into the job.

He had previously served as the presidential secretary for judicial affairs under the Roh Moo-hyun government and a former vice president of the progressive lawyers' group Minhyun, also known as Lawyers for a Democratic Society.

Heo Eun-ah, a spokesperson of the main opposition People Power Party, said through a statement, "The people's hearts are bitter even though Senior Secretary Kim has said he would resign."

She added, "The behavior of the children of people in power in the government is a clear standard by which we can judge the fairness and justice of this society," claiming that Moon government officials "failed" in this aspect.

Former Justice Minister Cho Kuk, Moon's first senior presidential secretary for civil affairs from 2017 to 2019, and his wife Chung Kyung-sim, a professor, have also been mired in controversy over a series of academic frauds to help their daughter get into college and medical schools. Cho served just 35 days as justice minister before resigning from the post in October 2019 after the scandals and preferential treatment allegations surrounding his family.