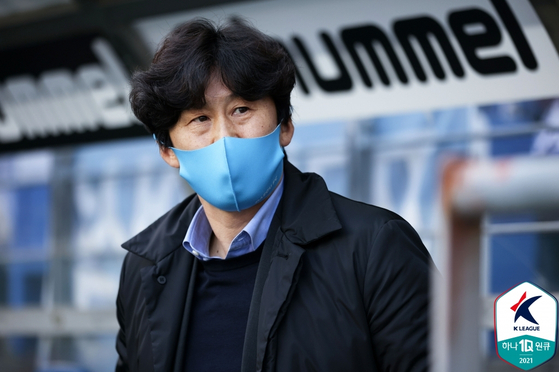 According to the club, who have just enjoyed an impressive season with Lee at the helm, the termination was decided under mutual agreement.

After started his coaching career in 2019 in Daegu, Lee became acting head coach in 2020 and was officially named Daegu’s 11th head coach this year. During the two years with Lee at the helm, Daegu marked 34 wins, 18 draws and 27 losses in 79 matches. This season, Daegu finished the K League regular season in third place behind leader Jeonbuk Hyundai Motors and runner-up Ulsan Hyundai.

That third-place finish was the best in the club's history.

Daegu also made it all the way to the FA Cup final, although they fell apart at the final stage, losing the cup to K League 2 side Jeonnam Dragons.

Even during the last match, Daegu initially appeared to have the upper hand until the tide turned to the Dragons and lost. Daegu had won the first leg of the final 1-0 on Nov. 24, but the two clubs tied the two-leg final 4-4 on aggregate and Daegu had to concede the trophy on away goals to the Dragons, who became the first K League 2 club to win the FA Cup.

“I am grateful to our fans and coaching staff for supporting the club no matter what,” said Lee. “I have to say I grew from the experience and I am happy to leave on good terms. I hope Daegu achieve more things next year.”

Daegu is yet to name a new head coach.