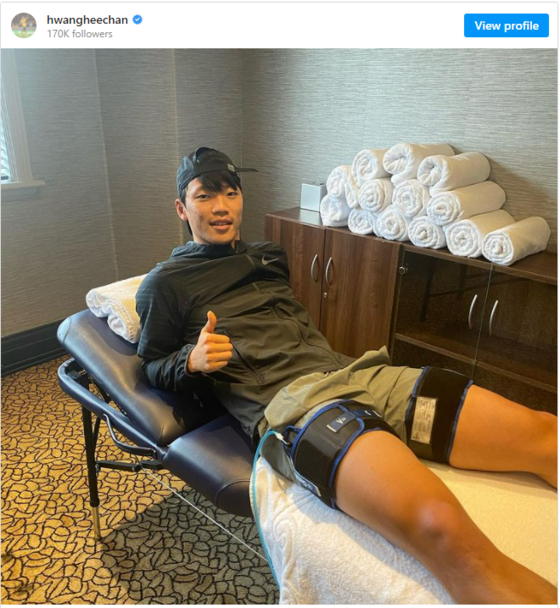 An image uploaded on Hwang Hee-chan's Instagram account shows the Wolverhampton Wanderers striker lying in a recovery suite with strapping on both legs. [SCREEN CAPTURE]


Wolverhampton Wanderers striker Hwang Hee-chan on Monday took to social media to reassure fans as the club continues to stay silent on his condition after he left a game early last week with what appeared to be a hamstring injury.

Hwang uploaded a photo on Instagram that showed him lying in what looked like a recovery suite with strapping on both legs. The photograph was accompanied by the caption "I'll be back stronger" in both English and Korean.

Hwang suffered an injury in the early stages of a Premier League clash with Brighton on Dec. 15. He left the pitch in the 12th minute of the game after a collision with Brighton full-back Tariq Lamptey. Brighton were awarded a free kick and Hwang attempted to play on, but left the pitch moments later grabbing his thigh.

Wolves went on to win the game at the American Express Community Stadium in Brighton, with a late first-half goal from Romain Saiss sealing the deal for the midlands squad.

Wolves have made no further announcement about Hwang's injury as of press time, although it appears from replays of the incident that Hwang's toe may have got stuck in the ground, causing a brief hyperextension, likely leading to a hamstring injury.

Hwang was not included in the squad for the club's Sunday match against Chelsea, his absence for the important fixture essentially confirming that he is injured to some extent.

After a dramatic arrival in the Premier League in September, Hwang has been going through an offensive cold snap in recent games. The short Dec. 15 appearance marks his seventh straight game without a goal, a disappointing statistic for a player who scored four in his first six games.

The dry spell also comes at a bad time for Hwang's career, with the January transfer window now just two weeks away. Hwang joined Wolves on loan for the season, with the club reportedly maintaining the option to buy Hwang for around £13 million ($19 million), and it quickly became apparent that a more permanent offer is likely to be on the table in January.

A goalless run and an injury immediately before talks begin certainly won't be the impression that Hwang was hoping to make.