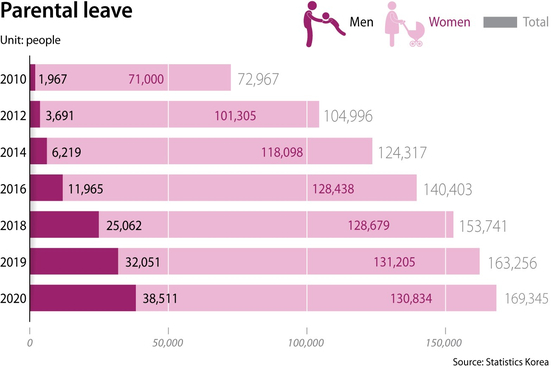 "It wasn't hard for me to go on parental leave because I work as a civil servant, but that doesn't mean I didn't worry about my career or financial problems," said a 45-year-old man. "But I think it was the right choice, because every day I spend with my daughter is so precious."

His wife went on parental leave for a year and a half after giving birth, and he is now in charge of taking care of his daughter at home. Every day, he gets his three-year-old daughter ready for kindergarten and prepares food.

According to Statistics Korea, 38,511 men went on parental leave last year to take care of children aged 8 or younger. That's up 20.2 percent on year.

"There are more policies encouraging men to go on paternity leave, such as paid parental leave," said Kang Yoo-kyung, head of the social statistics planning division at Statistics Korea. "More men now take part in household chores, which we think is one of the reasons."

By size, big companies were more receptive of their employees going on parental leave.

By industry, 23.2 percent of the men worked for manufacturing companies. Employees working in the public sector were 19.5 percent of the total. For women, 18.4 percent were in medicine and health care. Public sector jobs came second at 14.6 percent.

In a study of people who took parental leave from 2011 through last year, 74.4 percent of the parents took time off work right after their children were born. Another 10.3 percent did so when the children were 6.