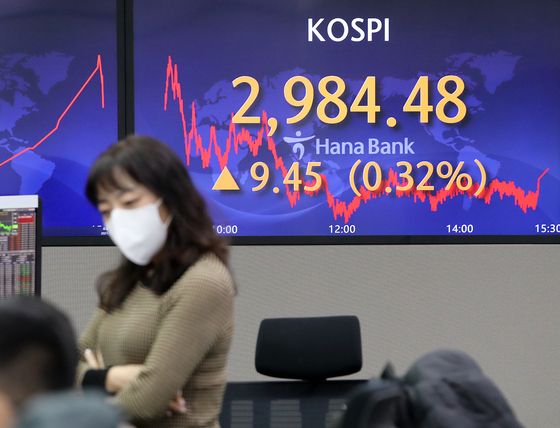 A screen in Hana Bank's trading room in central Seoul shows the Kospi closing at 2,984.48 points on Wednesday, up 9.45 points, or 0.32 percent, from the previous trading day. [NEWS1]


Stocks closed up for a second straight session Wednesday, led by chipmaker gains and easing fear about the Omicron variant. The won rose against the dollar.

Trading volume was moderate at about 453 million shares worth some 8.6 trillion won ($7.2 billion), with gainers outnumbering losers 486 to 357.

The market got off to a robust start, tracking overnight rallies on Wall Street amid easing fears about the impact of the omicron variant on the global economy.

The Kospi, however, pared part of its advances later in the day as retail investors dumped local stocks to lock in gains.

Overnight, the tech-heavy Nasdaq composite jumped 2.4 percent and the Dow Jones Industrial Average added 1.6 percent, largely on optimism that the symptoms of the Omicron strain are not as severe.

"Investors seem optimistic about the chip performance [down the road] but not as much about the other sectors," said Eugene Investment & Securities analyst Huh Jae-hwan.

The local currency traded at 1,192 won against the dollar, down 0.9 won from the previous session's close.

Stocks eke out a gain as institutions provide support