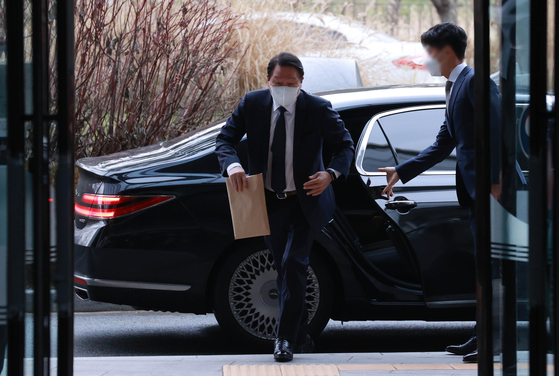 Chey Tae-won, SK chairman, arrives at the Fair Trade Commission office in Sejong on Dec. 15 to defend against accusations regarding LG Siltron's acquisition in 2017. [YONHAP]

SK Group chairman Chey Tae-won was fined by the Fair Trade Commission (FTC) for a sweetheart intra-group deal in which the company he leads sold him shares in another company at a discount.

The punishment comes despite a personal appearance in front of the regulators to argue that the transaction had to be done to defend against Chinese interests getting a minority stake in a strategically-important company.

In April 2017, Chey bought 29.4 percent of LG Siltron, a semiconductor wafer manufacturer controlled by SK Holdings, which Chey leads as chairman and co-CEO and influences as an 18.4 percent shareholder. The price he paid was 28 percent less than SK Holdings, now SK Inc., paid just months earlier for its controlling stake in LG Siltron, now SK Siltron.

In its decision, the FTC took the unprecedented move of fining him for finagling an "opportunity" for unfair benefits rather than for the unfair gains themselves.

While the punishment was considered a slap on the wrist, it could be precedent setting, as it establishes that the law can be broken even before profits questionably gained are realized.

The case was not turned over to prosecutors for possible criminal charges, which could have resulted in jail time, as Chey was found not to have engaged in the act with knowledge that it was illegal.

Civic group have accused Chey not only of profiting from the sale but also gaining opportunity to profit from the stake further, including from SK Siltron dividends and from the increase in the value of the stock.

The FTC estimates that the value of the stake that Chey owns increased by 200 billion won by the end of 2020 compared to 2017.

Chey personally appeared at FTC headquarters in Sejong on Dec. 15.

He did not make a public statement before entering the FTC meeting. It has been reported that during the meeting he emphasized that it was important for him to own one-third of the company to defend SK Siltron from foreign influence.

He also argued that he did not purchase the stake for unfair gains or to strip  business opportunities from the company.

The FTC said the biggest problem was the process.

SK Holdings concluded that Chey's purchase of the one-third stake in the acquired wafer company did not call for a board vote. Chey had reported his intention to buy the stock to the governance committee of outside directors, and this was deemed sufficient.

The FTC said the law stipulates that business opportunity decisions must be approved by the full board of directors and with the knowledge of all relevant facts.

It added said that it did refer the case to prosecutors as the act was not considered a wilful violation of the law due to the lack of precedent, as no one has been found guilty previously of illegally acquiring potential gains.