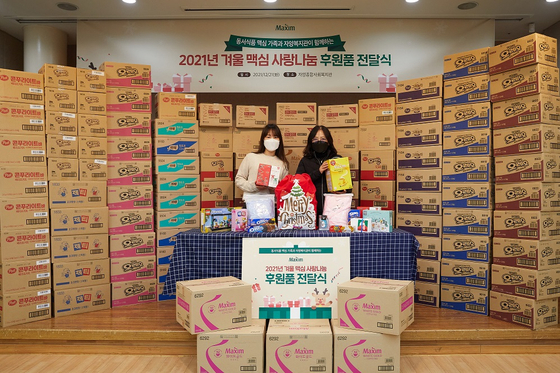 
Dongsuh Foods delivered a set of presents to children at a community welfare center in celebration of Christmas, the company said Wednesday.

Dohgsuh Foods is the company behind a number of instant coffee brands, including Kanu and Maxim.

The company said it delivered puzzles, Lego sets and blankets to children at a community welfare center located in Jayang-dong, Gwnagjin District in western Seoul.

Snacks, including Oreos and Ritz crackers, sold through Dongsuh Foods, were also delivered to them.

The donation was part of a voluntary campaign organized by an online community of Maxim coffee drinkers, according to Dongsuh Foods.

The campaign is a biannual event that started and has continued since 2009.

The campaign was virtual last year and this year due to social distancing.

“We delivered the gifts with consumers with hopes for neglected children to have a warm end of the year,” said Choi Hee-yeon, Dongsuh Foods marketing manager, in a statement, adding that the company will continue to make such donations.