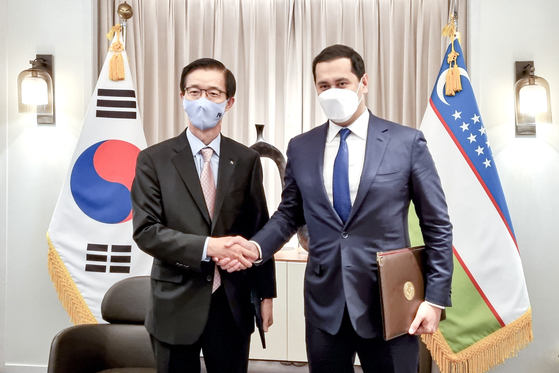 The Export-Import Bank of Korea (Eximbank) announced Sunday that it has agreed to strengthen economic ties with Uzbekistan, one of the key regional partner countries for the Korean government in its New Northern Policy, via the Economic Development Promotion Facility (EDPF).


The EDPF is a funding program for both humanitarian aid and commercial financing.

The Korea Eximbank launched the EDPF in 2016 in a bid to provide financial support for developing countries struggling to promote large-scale projects.

The signing ceremony held at the Blue House was attended by President Moon Jae-in and President Shavkat Mirziyoyev of Uzbekistan as well.

Both governments agreed to enhance cooperation in sectors with strong growth potential such as infrastructure, information technology and healthcare, ranging from government-led projects to public-private partnerships.

“The MOU is the final piece in establishing the foundation for economic cooperation between Korea and Uzbekistan,” said Bang.

“The Korea Eximbank expects the business opportunity for domestic companies to increase as the Uzbek government is actively promoting new renewable energy projects through public-private partnership.”

Prior to the signing ceremony, Bang and Umurzakov signed a loan agreement worth $74 million on Dec. 15 to provide medical supplies for Uzbek hospitals.

The project aims to offer modern medical supplies to hospitals in fourteen provinces, bolstering cooperation between Korea and Uzbekistan in the healthcare sector.

The Export-Import Bank of Korea