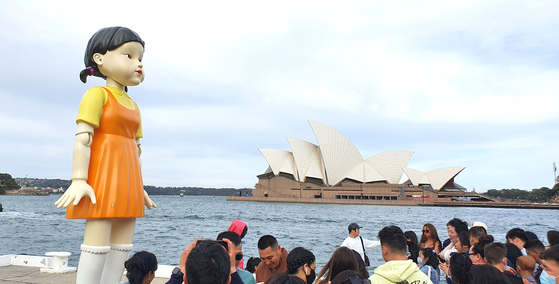 The statue of the famed doll Young-hee from Netflix series "Squid Game" was installed between Sydney Opera House and Harbour Bridge in Australia from Nov. 1. to 4. Over 10,000 tourists visited the statue over the course of four days. [YONHAP]


“I saw a knock-off of the Netflix series ‘Squid Game’ called ‘Octopus Game’ being presold by an American company,” an insider from the international sales division of a content company told the JoongAng Ilbo, an affiliate of the Korea JoongAng Daily.

In the U.S. market, fans of K-pop are now expanding their interests into K-content. Unlike in the past, where Hallyu, or the Korean wave, relied on the fandom of a particular actor or a K-pop idol, K-content relies on “the particular storytelling method in Korea which has resonated with [the global audience]," said Lee Jung-se, the head of the content division at Megabox. "We might be able to look at this longterm instead of as a temporary phase,” Lee added.

In line with this trend, the approach that Korean content investors and distributors are taking to global studios has shifted. Local companies are no longer aiming to “enter” the global market, but to “expand” their territory and follow in the footsteps of four-Academy Awarrds winner “Parasite” (2019), Netflix zombie drama “Kingdom” (2019-) series, “Squid Game” (2021) and “Hellbound” (2021) which have successively seen worldwide success. Due to convenience of subtitles provided by streaming services such as Netflix, the “one-inch tall barrier of subtitles” has been lowered and the expressway to the heart of the global content market is wide open.

“The potential of K-content production was already on par with the global market but OTT [over-the-top] platforms and active viral marketing thanks to YouTube and social media has connected the global audience,” said Cho Sung-woo, the head of the global content division of CJ ENM. “The U.S. market which was repetitively creating similar remakes and sequels was looking for something new, and is now recognizing that K-content is not a temporary trend due to successive jackpots [...] Now, American studios ask us first to co-plan, develop and invest in Korean-language content.” 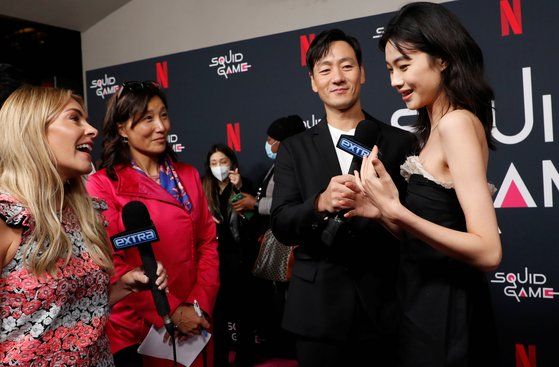 Actors Jung Ho-yeon, right, and Park Hae-soo, second from right, from Netflix's "Squid Game" being interviewed by American entertainment outlets at an event in Los Angeles on Nov. 8. [REUTERS/YONHAP]


CJ ENM is speeding up its global expansion of content. Last month it made its largest investment ever by purchasing 80 percent of the “scripted business” of American production company Endeavor Content, which is behind hits such as “La La Land” (2016) and British drama series “Killing Eve” (2018-) On Dec. 8, it announced that it will be forming a strategic partnership with American distribution group ViacomCBS, which is in possession of American broadcasters CBS, Paramount Pictures and MTV. The two companies will be collaborating on the production processes of content based on CJ ENM’s Intellectual Property (IP) including planning, development, investment and distribution.

IP is a term widely used in the entertainment industry to describe a concept, theme, characters or other elements that can be adapted into other types of entertainment formats.

CJ ENM also opened its branded channel featuring K-content on Dec. 14 through OTT platform Pluto TV, an affiliate of ViacomCBS. In return, Paramount+, another streaming service of ViacomCBS, will debut in Korea next year via Tving, a streaming platform that is an affiliate of CJ ENM. ViacomCBS will also invest in the production of seven Tving original series.

"Korean entertainment has become a cultural juggernaut with unprecedented demand, and CJ ENM is behind some of the biggest international hits that transcend borders, including Academy Award-winning film 'Parasite,'" said Dan Cohen, president of ViacomCBS.

“It’s different than in the past when it used to simply be co-developing [content] as projects, or distribution of Korean content in the American market,” said CJ ENM's Cho. “There were limitations regarding film distribution in theaters as in how much we can actively expose and promote our content to the American audience, but now we can do that to some 50 million subscribers of Pluto TV. It also increased the chances for Korean actors and creators to collaborate with American studios.”

Film distributor Next Entertainment World (NEW) behind director Yeon Sang-ho’s hit zombie film “Train to Busan” (2016) partnered with Library Pictures International (LPI) based in Los Angeles in March, signing a deal to co-finance its films for the next three years. The investment applies to all movies that have already been made and are awaiting release, as well as scripts still under discussion. JTBC Studio acquired Wiip, the independent production firm behind recent HBO series “Mare of Easttown” in May and is pursuing co-production, expansion in distribution of its content and remakes using its IP.

Since the film industry is still suffering due to the Covid-19 pandemic, global OTT platforms that are landing in Korea such as Apple TV+ and HBO Max will act as an important bridge to expand K-content worldwide. Lee Jung-ha, the head of the global sales division at Content Panda, a film distributor that is affiliated with NEW, noted that “K-content is being sold everywhere, not only limited to Asia but in Europe and South America as well.” 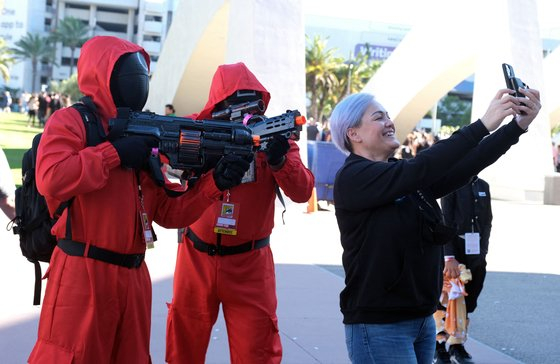 A visitor takes a photo with participants wearing costumes from "Squid Game" at the San Diego Comic Convention on Nov. 26. [AFP/YONHAP] 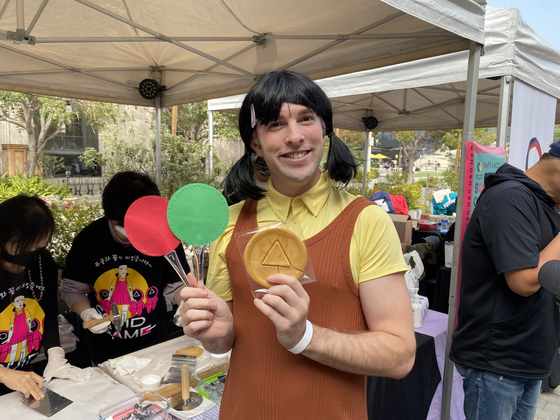 One participant dressed up as the doll Young-hee from "Squid Game" posing for a photo with "dalgona" (melted sugar candy) at an event in Culver City, California on Nov. 6. [YONHAP]


However, experts say that in order for K-content to truly progress, there needs to be a formation of a secure and healthy creative ecosystem. An insider from film distributor Lotte Cultureworks behind another hit zombie film “#Alive" (2020) said, “The competitive edge for content companies is to secure IPs that have potential to globally resonate with the audience. In order for enthusiasm over K-content to continue, there needs to be a formation of a virtuous cycle that can prompt global companies to successively reinvest in the Korean film industry.”