Moon to move back to Yangsan after retirement

Moon to move back to Yangsan after retirement 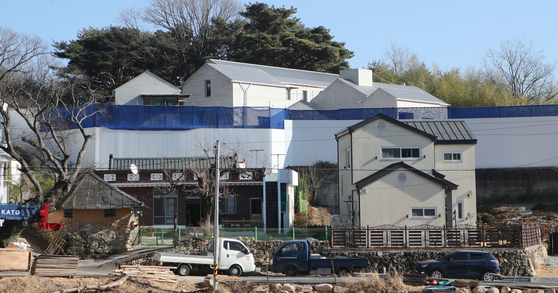 
After President Moon Jae-in’s five-year term ends next year, he is expected to live in a newly constructed post-retirement home with his wife, first lady Kim Jung-sook, in Pyeongsan Village in Yangsan, South Gyeongsang.

Facilities to accommodate guards are also being built nearby, though the construction is coming along at a slower speed than that of the residence. The pastel gray-blue rooftop and white walls of the house can now be spotted behind construction screens.

Construction for the new private residence began in April, and is expected to be completed as early as late March next year. Moon’s presidential term ends in early May.

The Presidential Security Service is building a security office and accommodation for the guards near the house, in accordance to the relevant law on security for former presidents.

The presidential couple initially planned to return to Maegok, where they had lived since 2008, after retirement, but eventually chose Pyeongsan Village due to security reasons, as the old residence would not be able to accommodate the guards.

There were initially some protests by local residents over the construction noise and other inconveniences, while others welcomed the move.

The village is good for hiking, located near the scenic Mount Yeongchuk, often referred to as the Alps of Yeongnam.

The Tongdosa Temple, a temple of the Jogye Order of Korean Buddhism and a Unesco World Heritage site, is located just 2 kilometers (1.2 miles) from the residence.

The grave of Moon's mother, Kang Han-ok, is 13 kilometers away.

It is also 50 minutes by car from Bongha Village in Gimhae, where Moon’s longtime friend, former President Roh Moo-hyun, whom he served as senior secretary for civil affairs and chief of staff to, is buried.

Moon in a New Year’s press conference on Jan. 14, 2020, said he wants to live as a “forgotten person after retirement.”