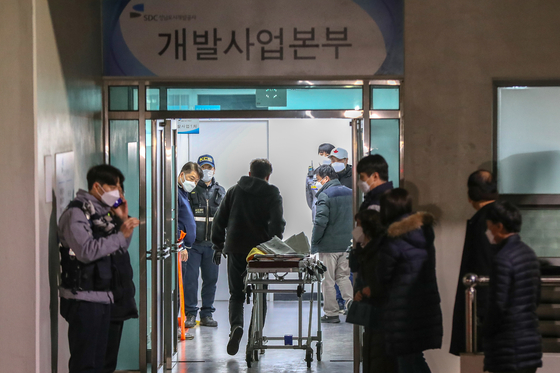 
Kim Moon-gi, director of the Seongnam Development Corporation's project development team, was found dead in his office Tuesday in a possible suicide.

He was being investigated as a person of interest in the Daejang-dong development corruption scandal and is the second official from the city-run developer to die this month.

The company has been hit with allegations that high-ranking employees played a key role in setting up a shareholder composition and profit distribution scheme massively favorable to Hwacheon Daeyu, a small asset management company, and its Cheonhwa Dongin affiliates.

An official from the company who spoke to the JoongAng Ilbo on the condition of anonymity said, "Employees who received word from Kim's family that they could not reach him opened the door of the director's office and found Kim dead."

Yoo was found dead near his home in Goyang, Gyeonggi, a day after leaving a resignation letter with his secretary.

Before Kim's body was found, the police received a report that he had gone missing and were trying to locate him. Although Kim appeared to have gone to work as usual, the family filed a report in the evening when they could not contact him.

Police believe that Kim, like Yoo, took his own life in connection with the allegations he faced in the Daejang-dong development scandal. They have refused to confirm whether he left a suicide note.

According to the state prosecution service, Kim was last summoned by investigators on Dec. 9 as a witness — not as a suspect — in the Daejang-dong development scandal.

At the time the Daejang-dong development in Seongnam was launched in 2015, Kim was the chief of the city developer’s project development division.

Appointed to the post by Yoo Dong-gyu, the company’s former acting president who was indicted in November for breach of trust and bribery in connection with the project, Kim faced suspicion that he was one of those trusted by Yoo to carry out the development in line with his wishes.

Kim also served as one of the committee members who evaluated the multi-company bid led by Hana Bank, which included Hwacheon Daeyu, to participate in the project. He later served as an executive in the mixed private-public consortium Seongnam Garden, which spearheaded the project and in which the city developer held a 50 percent stake.

Prosecutors' interest in Kim’s involvement in the project focused on the fact the city developer did not include a customary excess profit restitution clause in either the bidding guidelines or the investment contract.

They allege that such favoritism enabled the company from 2019 to rake in a profit of 57.7 billion won ($48.3 million) on an investment of 49.95 million won, which was a 1 percent stake in the project in Seongnam, Gyeonggi, just south of Seoul.

Kim appeared to have recently hired an attorney, suggesting he was preparing his legal defense should he become a suspect in the case.

News of Kim’s death led to renewed accusations from the main opposition People Power Party (PPP) that the state prosecution service’s probe was only going after the minor actors in the scandal, while leaving the main players untouched.

The PPP has alleged that the ruling Democratic Party’s (DP) presidential candidate Lee Jae-myung was the true mastermind behind the Daejang-dong development scandal.

“While Kim oversaw the bidding process, which included Hwacheon Daeyu, and set up the project’s distribution scheme, in the grand scheme of things he was but a feather on the end of a larger conspiracy,” wrote PPP lawmaker Kim Eun-hye in an opinion piece on Wednesday.

“I wait for Lee Jae-myung to take responsibility as the architect of this project as the lives of those tasked with carrying out his designs continue to be tragically taken.”

Lee, who was mayor of Seongnam at the time the Daejang-dong development was organized, said he oversaw the project’s design in an October parliamentary audit of the Gyeonggi provincial government, but has adamantly denied allegations that he masterminded the project to favor acquaintances during his time as Seongnam mayor.