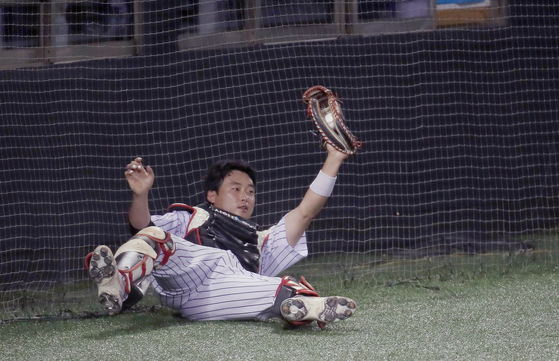 
The Samsung Lions on Wednesday chose catcher Kim Jae-seong as their compensation player pick from the LG Twins in exchange for the Seoul club signing free agent Park Hae-min.

Under KBO rules, if a team requires a free agent that the KBO has classified in the top "A" tier of players on the market that year, the receiving club is required to compensate the player's former team. Compensation can come in one of two ways: Either three times the player's salary from the former season, or double their salary and a compensation player of the other team's choice.

Kim, a young catcher who made 58 appearances for the Twins this year, was not included on the Dinos' 20-man protected list.

Kim was drafted by the Twins in 2015, but has spent most of his career so far in the Futures League, including playing as a catcher for the military baseball team while fulfilling his mandatory military service. Kim only made 12 appearances in the KBO prior to 2021, but finished this season with a .138 batting average, nine hits, three RBIs and a home run.

In a press release, Samsung noted that Kim was chosen as a development opportunity, highlighting his potential to produce long balls. The club saw him as a good defensive pick with the potential to develop into a first team player in the future.