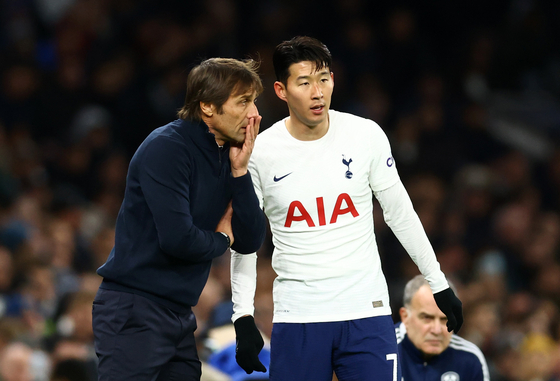 
Tottenham Hotspur manager Antonio Conte says Son Heung-min is a "world-class player" and a pleasure to coach, adding that he admired the Korean striker long before joining the London club at the start of November.

Conte discussed Son in detail while talking to reporters about his experience after nearly two months at the helm of the club on Tuesday.

"We are talking about a really world class player," Conte said. "I have seen him before becoming manager of Tottenham only on TV. He impressed me a lot. But when you have the possibility to train him and become his coach, you can see really the quality of this player.

"It's fantastic because he had quality but also run, intensity, the resilience also, and I think that Sonny is a top player. Not a good player — a top player."

"For sure I try to improve him, to help him, but we are talking about a player that is now already at an important level," Conte said. "He has to continue in this way and have this anger, this desire, because we need to have players with ambition.

"If you have ambition it means you are never happy about your performance. You want always more, more, more and we need these players to improve the level of Tottenham. Sonny is one of these players."

Conte's accolades come just a few days after Son was voted the 2021 Tottenham Fans' Footballer of the Year on Monday, beating three other finalists by a considerable margin in a vote conducted by Football.London.

Son took 63 percent of the fan vote, well ahead of Pierre Emile Hojbjerg, Hugo Lloris and Harry Kane, who finished last out of the four. Son also finished 19th in a national vote for the Fans’ Footballer of the Year, awarded to the most popular player in the Premier League.

Son has been on impressive form recently, scoring his third consecutive goal on Sunday in his first match back after a two-week spell on the sidelines with Covid-19. Son previously scored on Dec. 2 and Dec. 5, taking him to seven goals on the season so far.