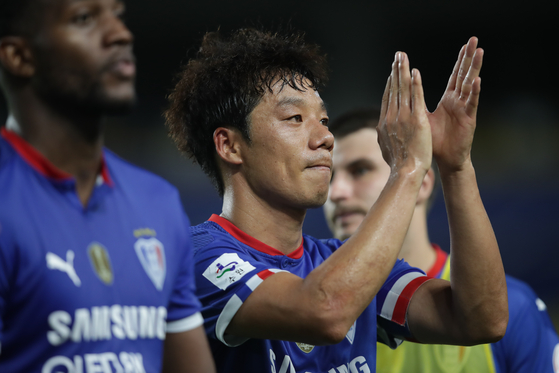 
Yeom Ki-hun, the oldest footballer in the K League 1, will play another year with the Suwon Samsung Bluewings next season.

The Bluewings announced Wednesday that they have decided to extend Yeom’s contract another year, with the 38-year-old now committed to the club until at least Dec. 31 next year.

This season, Yeom was the oldest player in the K League alongside Kim Kwang-suk of Incheon United and Kim Young-kwang of Seongnam FC.

The midfielder has been with the Bluewings since 2010, and appeared in 27 regular season matches this year, scoring one goal.

Yeom has made a total of 400 appearances in the K League, 392 of which were with the Bluewings. That number makes him the most capped Bluewings player ever. He has appeared in 43 FA Cup matches, also a tournament record.

Despite not being being a big scorer, Yeom is the K League's all-time assists leader, with 110. With 77 career goals to his name, Yeom is also just three goals away from becoming the first player in the history of the league to reach the milestone of 80 goals and 80 assists. The best scorer in the K League is Lee Dong-gook, the retired Jeonbuk Hyundai Motors striker who scored 190 goals during his time on the pitch.

Yeom also ties with Enio Oliveira Júnior, who once played for Jeonbuk, to top the all-time standing for penalties scored, with 17 goals.

Yeom will return to training with the Bluewings starting Jan. 3 in Jeju.

“My dream of playing football at the age of 40 has come true,” said Yeom, referring to Korean age. “I want to be of help to the club as much as I can. I will play next year as if it is my last.”