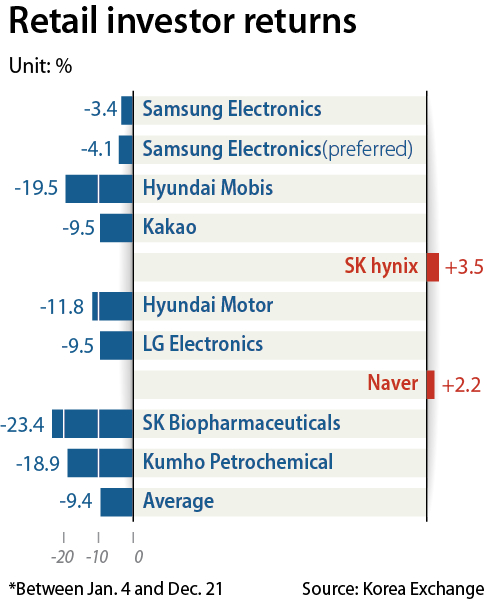 Retail punters filled their boots and lost their shirts, the only category of investor that ended the year down on their top 10 purchases.

A 46-year-old office worker in Seoul bought 80-million-won ($67,400) of shares in January and February, but is tens of millions of won worse off as a result. He used to own shares in more than 10 companies, but offloaded everything except Samsung Electronics, Hyundai Mobis and SK Innovation.

"I've been waiting for almost a year for them to rise, but I'm still sitting on 20-million-won losses," he said. "I'm so stressed out that I don't even check stock prices anymore."

Foreign investors gained an average 0.9 percent on their top 10, and institutions 4.8 percent.

"The poor performance of retail investors is almost obvious considering making investments were harder compared to last year," said Pyeon Deuk-hyeon, an analyst at NH Investment & Securities. "This year's stock market was a time when only professionals could see gains."

Some analysts say that retail investors picked the wrong time to buy shares.

Individuals bought 25-trillion-won worth of stocks, or 32 percent of their total net purchases, in January.

Individuals purchased 2-trillion-won each in Hyundai Motor and Hyundai Mobis in January, following news that the automaker could possibly cooperate with Apple for the Apple Car. Hyundai Motor traded at 267,500 won in Jan. 11 but closed at 209,000 won on Thursday.

"January was when fear of missing out in such a winning stock market reached its peak," said Jeong Myung-ji, an analyst at Samsung Securities. "Investing in companies with shares that already rose by a huge margin left retail investors with under performing investments."