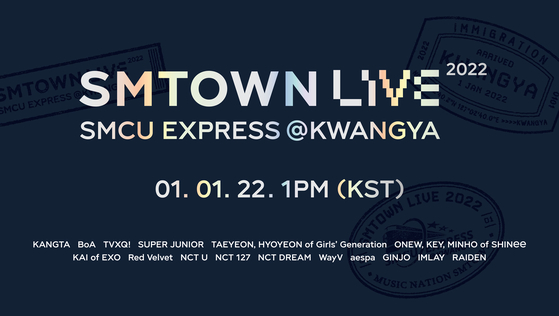 
SM Entertainment's online concert "SMTOWN LIVE 2022" will stream worldwide for free, according to the agency Thursday.

Annually held since 2008, this year's SM TOWN LIVE is set in "kwangya," which is the Korean word for wilderness.

Artists will gather at the SMCU Express Station in kwangya. SMCU stands for SM Culture Universe.

Popular SM Entertainment artists and bands including Kangta; BoA; Girls' Generation's Taeyeon and Hyoyeon; Red Velvet; Super Junior; Exo's Kai; SHINee's Key, Minho and Onew; NCT U; NCT 127; NCT Dream; WayV; and aespa, will take part in the upcoming concert with performances and collaborations that have not been seen before.