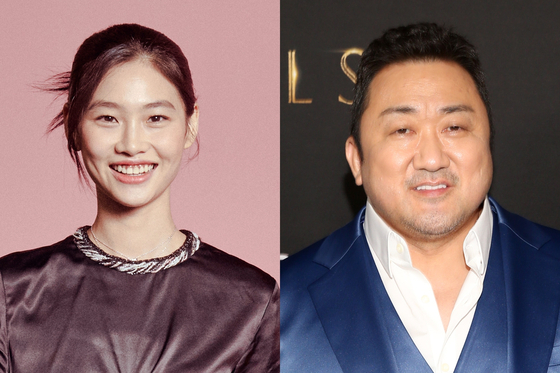 The magazine, which unveiled the list Thursday, called Jung an actor who "leapfrogged established stars to be the most followed Korean actor on Instagram.”

Ma was described as “a larger than life persona" who has the tenacity to make it as an action movie star.

The two were among 11 other stars including British actor Toheeb Jimoh of “Ted Lasso,” and Italians Swamy Rotolo of “A Chiara” and Ondina Quadri of “Small Body.”

Twenty-eight-year-old Jung began her career as a model in 2010, appearing on Korea’s “Next Top Model” and walking in New York Fashion Week in 2016. She made her acting debut this year through the hit Netflix Korea original series “Squid Game,” in which she played a North Korean defector competing among 456 others for a 45.7-billion-won ($38.6 million) prize.

Fifty-year-old Ma Dong-seok, also known as Don Lee in Hollywood, is a Korean-American actor who debuted in Korea through the film “Heaven’s Soldiers” (2005). Since then, he has played supporting roles in prominent films such as “Train to Busan” (2016) and “Along with the Gods: The Two Worlds” (2017). Ma made his Hollywood debut this year through his role as one of 10 superheroes in “Eternals.”