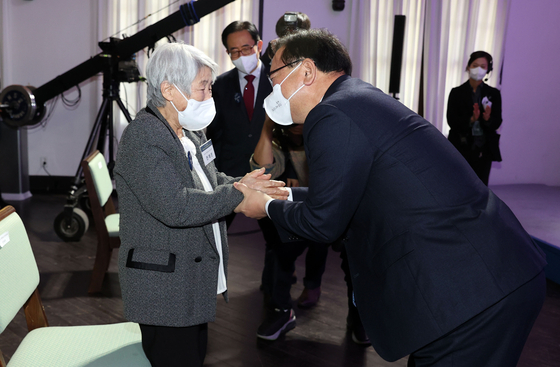 
Jeon Chae-ryeon was 8 years old when she and her mother in 1939 set off for Sakhalin in the Russian Far East to live with her brother, a forced laborer on the island at the time.


“At 90 years old, I am thankful to be able to say I have come home,” she said as she addressed the prime minister and other officials at the Jeongdong 1928 Art Center in central Seoul on Thursday. “What an honor it is to be standing before you today. Never was there a day that I did not think about my home country.”

Jeon was one of 21 first-generation ethnic Koreans able to return home last month on a government program. A ceremony to commemorate their return was held at the art center on Thursday.

Tens of thousands of Koreans were sent to work as forced laborers in Sakhalin during the Japanese annexation of Korea (1910-45). Following World War II, many of them were revoked of their citizenship and around 43,000 were left on their own in Sakhalin.

“I had the option to return home in 2000, but I could not leave my daughter behind,” Jeon said.

The law changed in January this year to allow the first-generation ethnic Koreans, their spouses and their sons and daughters and their spouses, regardless health status, to be able to apply for permanent residency in Korea.

They can also apply for Korean citizenship, which would allow them to hold dual citizenship with Russia.

The Korean government flew in a total of 260 first-generation ethnic Koreans and their relatives, who applied for permanent residency in Korea, from Nov. 27 to Dec. 10. Around 4,000 had returned before the law changed.

“The first-generation ethnic Koreans returning from Sakhalin did not lose hope even after all these years, even when their citizenships were revoked,” said Prime Minister Kim Boo-kyum. “Today it takes just three hours to fly between Korea and Sakhalin, but this journey could not take place for our ethnic Koreans for some 70 years. We are sorry it took so long, and we are so glad to be able to welcome you today. We will not stop until all of the Sakhalin ethnic Koreans who wish to return home are able to do so.”

“I don’t think I can fathom the depth of the sorrow and difficulties that the former forced laborers and their families had to face in Sakhalin,” said Jeong Eun-seo, a first-year student at Osong High School in Cheongju, North Chungcheong, in speaking at the ceremony. Jeong has been a regular volunteer to work with ethnic Koreans from Sakhalin through various civic groups.

“But when we got together over different activities and events, and made food and danced to 'Arirang,' it wasn’t hard to see that we are one people even after all these years we’ve spent apart. We are so glad to finally be able to say, 'welcome home.'”