Son drops to No. 39 on Guardian ranking of world's best male footballers

Son drops to No. 39 on Guardian ranking of world's best male footballers 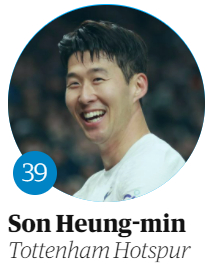 Son Heung-min came in at No. 39 on The Guardian ranking of the world's top male footballers, dropping 17 spots from last year. [SCREEN CAPTURE]


Tottenham Hotspur striker Son Heung-min came in at No. 39 on The Guardian's "100 best male footballers in the world 2021," dropping 17 spots after what the British newspaper called "a tough period."

Son, who ranked at No. 22 in 2020, is the only Asian player included on the list, which annually ranks professional football players from leagues all over the world.

"Son has lived through the Jose Mourinho meltdown at Tottenham, the uneasy transition to Ryan Mason and the failed appointment of Nuno Espírito Santo, with his numbers under them during the calendar year saying everything — 12 goals in all competitions," the Guardian article said.

"The hope is that things will pick up under Antonio Conte for a player synonymous with pace, direct threat and insatiable hunger. Son has helped Korea to take sure-footed strides towards automatic qualification for the World Cup."

The Guardian ranking, which was posted today, appears not to take into account Son's performance over the last month, since Conte was appointed as Spurs manager.

Son has now scored a total of 16 goals this calendar year, four of them since Conte took the helm. He has scored in his last three consecutive starts for the London club, on Dec. 2, Dec. 5 and Dec. 19.

He was out of action between Dec. 5 and Dec. 19 when a Covid-19 outbreak crippled Spurs, with Son believed to be one of the players that was infected.