'Kick a Goal' production team apologize for tampering with footage

'Kick a Goal' production team apologize for tampering with footage 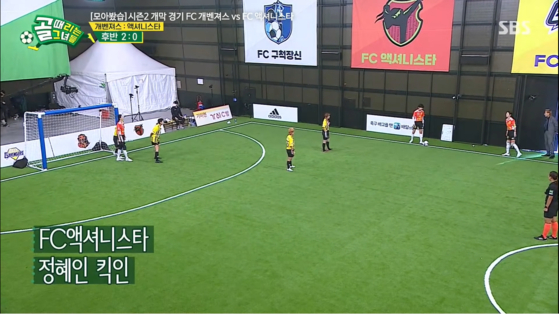 A scene from SBS's ″Kick a Goal″ [SCREEN CAPTURE]


The production crew for SBS’s television football variety show “Kick a Goal” (2021-) admitted Friday that some of the footage had been tampered with.

An apology was uploaded on the “Kick a Goal” section of SBS’s website.

“We apologize for editing the order of the broadcast footage and inconveniencing viewers,” the statement reads.

“The game results and final scores are not different from what was broadcast, yet in some episodes the order of the edits were different from the actual order,” it continued. “It was the staff members’ fault and now we have realized that the integrity of sports comes first, before the pursuit of entertainment.”

The statement ended with a promise to be more careful so a repeat incident does not occur.

In “Kick a Goal,” female celebrities form teams and compete against each other in football matches. The show initially received public attention because it was one of a very few local variety shows that featured a large number of female cast members.

However, in the most recent episode aired on Dec. 22, the two teams that were playing finished their game with a score of 6-3. However, a different score appeared on the score board during the game, raising suspicions among viewers that the scores were manipulated.

No time for silence