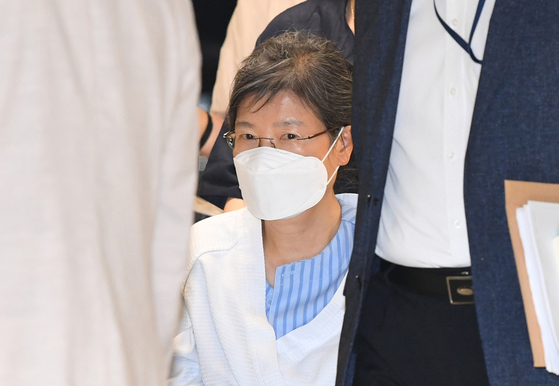 Former President Park Geun-hye is pushed in a wheelchair into Seoul St. Mary's Hospital in southern Seoul for treatment on July 20. Park, convicted for corruption and abuse of power, was granted a special pardon by the government Friday. [YONHAP]


Former President Park Geun-hye was pardoned Friday by the Moon Jae-in government ahead of the new year.

The special pardon comes four years and nine months after Park, 69, was convicted of corruption and abuse of power and sentenced to a total of 22 years in prison.

Park was impeached in December 2016 and removed from office in March 2017 over an influence-peddling scandal surrounding her confidante Choi Soon-sil.

She was among a list of 3,094 people announced by the Justice Ministry who were granted special amnesty by the government and will be released on Dec. 31.

Park was granted amnesty in consideration of her deteriorating health, said the ministry.

Mass protests against the former president and her close friend Choi led to Park's historic impeachment by the National Assembly in December 2016. The Constitutional Court's voted to uphold the parliamentary decision in March 2017.

On Jan. 14 this year, the Supreme Court upheld a 20-year prison term for former President Park Geun-hye, the final legal judgment which opened up the possibility for a pardon.

Park, who received shoulder surgery in 2019, has suffered from chronic shoulder and back pain and was hospitalized three times this year. She is expected to be released directly from the Samsung Medical Center in southern Seoul, where she is currently hospitalized.

The government also pardoned Han Myeong-sook, a former prime minister during the Roh Moo-hyun administration, who was convicted of bribery and completed her two-year prison sentence in 2017.

"We must overcome the pain of the past and move forward into a new era," Moon said on his decision to grant amnesty, according to presidential spokesperson Park Kyung-mee. "Now is the time to boldly join forces toward the future rather than quarrel with each other caught up in the past. In particular, considering the many challenges we face, national unity and humble inclusiveness are more urgent than anything else."

In the case of former President Park, Moon "took into account the fact that her health condition deteriorated significantly after serving close to five years in prison," the spokesperson added.

The amnesty, Moon said, will help to "overcome differences in opinion and serve as an opportunity to open a new era of unity and harmony," asking for "broad understanding" from even those who oppose a pardon.

Former President Lee Myung-bak, who is serving a 17-year prison sentence over embezzlement and bribery convictions since 2018, was not pardoned.

Lee was president from 2008 to 2013, and Park succeeded him until she was ousted.

Justice Minister Park Beom-kye said in a press conference that Lee and Park's circumstances were "different" and that the government "has to take into consideration the public sentiment" in reaching such a decision.

The minister said that a special pardon "is the unique authority of the president, as head of state," adding that Moon "considered it from the viewpoint of public consensus, judicial justice, rule of law, national unity and resolving conflict."

The decision, which comes ahead of the presidential election next March, comes as a surprise as the Blue House had said until recently it was not considering pardoning ex-President Park.

Her worsening health was a "very important" factor in considering the pardon, said the Justice Ministry, amid medical opinions that Park needed inpatient treatment for orthopedic and dental issues and mental health concerns.

Park said in a statement through her attorney Yoo Young-ha, "I would like to apologize to the public for causing so much concern."

She also expressed her "deepest gratitude to President Moon Jae-in and government authorities who decided to grant a pardon despite many difficulties," Yoon told reporters at the Samsung Medical Center.

Park is expected to stay hospitalized to concentrate on treatment for the time being after her release. While she has been stripped of privileges granted to former presidents, she is expected to be provided minimum security benefits.

The Democratic Party (DP) said it "respects" the government's decision to pardon Park, and the ruling party's chief, Song Young-gil, called it "a constitutional right of the president."

The DP's presidential candidate Lee Jae-myung also said he "respects President Moon's difficult decision agonizing over national unity" but called on Park to give a "sincere apology to the people."

The main opposition People Power Party (PPP) presidential candidate Yoon Suk-yeol said he "welcomed" the pardon though it comes late, adding, "I hope she can recover her health fast."

Lee Jun-seok, the PPP chief, said he will "not make a political evaluation" on Moon's pardon decision and added, "As the party leader, I once again apologize for disappointing the people with the influence-peddling incident during the former President Park's administration." Other PPP officials called for the release of Lee as well.

Upon her release on New Year's Eve, Park, the first Korean president to be impeached, will have spent 1,737 days in incarceration, the longest imprisonment of any former Korean head of state to date.