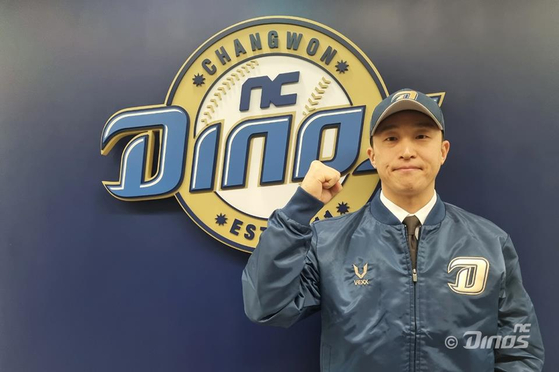 Son Ah-seop poses after signing with the NC Dinos on Friday. [NC DINOS]


The NC Dinos on Friday signed outfielder Son Ah-seop on a four-year-deal worth 6.4 billion won ($5.4 million).

With Son, the Giants have effectively replaced top slugger Na Sung-bum, who signed with the Kia Tigers on Thursday, with quite possibly the league's best contact hitter. Son's career .324 batting average puts him among the very best batters for average in the history of the KBO and this year he became the youngest player ever to reach 2,000 hits.

Son joins Park Kun-woo, another free agent outfielder with serious contact hitting skills also acquired this offseason. With the pair, the Dinos make a marked shift from swinging for the fences to playing with a little finesse, a move that was also evident in the club's decision to drop foreign slugger Aaron Altherr for mid-range precision hitter Nick Martini.

"I am happy to join NC," Son said. "I believe in the team's goal of trying to win a championship every season. I'm sad to leave the Giants, but I am confident I can tackle this new challenge."