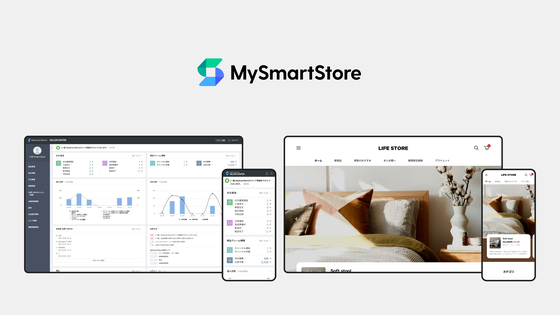 A promotion for Naver’s MySmartStore service in Japan. The official launch is scheduled in spring. [NAVER]

Naver controlled 17 percent of the Korean e-commerce market in 2020, followed by Coupang’s 14 percent and eBay Korea’s 12 percent, according to data from Kyobo Securities.

It creates online shopping malls for individual sellers that can be synced to a Line messaging app account. Naver plans to make the service official by spring 2022.

Naver further plans to expand across Southeast Asia and Europe.

It jointly invested in a 1-trillion-won ($842-million) fund created with Mirae Asset Group in 2018, with each company putting in 500 billion won. Grab, a Singapore-based food delivery, and Bukalapak, an Indonesian e-commerce provider, are some of the companies included in the fund. Naver also invested 155 billion won in Wallapop, a Barcelona-based marketplace for trading secondhand goods.

Naver said it seeks to generate synergy effects with international companies it has invested in to expedite its global expansion. 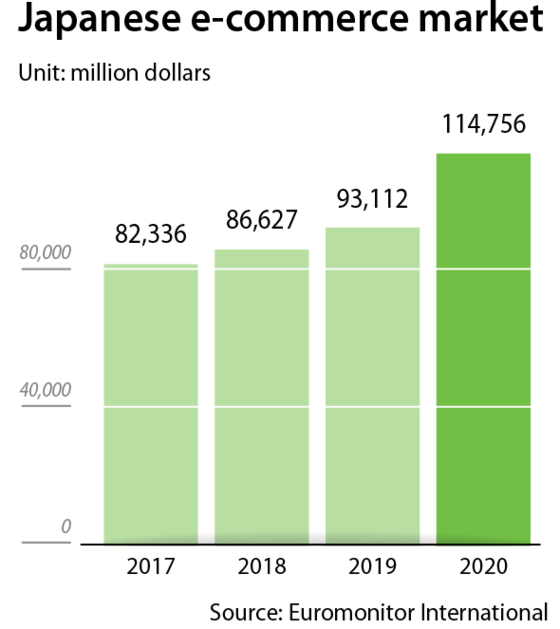 
Naver is a latecomer to the Japanese e-commerce market, but it says it still has a chance because of the relatively small e-commerce penetration rate in the country and its strong local partnerships.

“The online shopping penetration rate is low in Japan, but that will actually function as an opportunity for a latecomer like Naver because that means there’s more room for growth,” said Yoo Jee-min, a spokesperson for Naver.

In 2020, 49 percent of households with two or more people in Japan purchased goods or services online, according to Statista. The internet shopping usage rate in Korea was 69.9 percent in the same year.

Utilizing the Line messenger app, which is the most used mobile messenger service in Japan, Naver hopes to lower the entry barrier for using MySmartStore.

The service, synced to a Line app account, allows sellers to offer promotions and answer customer inquiries through Line chat.

Line oversees the sales and marketing of Naver’s e-commerce business in Japan.

Naver generates profit from receiving commission on sales made on websites it creates. But to recruit sellers, the company is temporarily offering zero commissions for a year to people who newly join MySmartStore by the end of March. Making payments on the messaging app may also become possible in the near future, according to Naver.

Cosmetics, food and beverage sellers are some of the early MySmartStore customers.

The IT company is also banking on its local partners to help its foray into the country.

Japan’s e-commerce market is controlled by three major players: Amazon, SoftBank and Rakuten. In 2020, Amazon accounted for 25 percent of the market, followed by SoftBank at 14 percent and Rakuten at 12 percent, according to Euromonitor International.

Naver’s local partners include Line and Yahoo Japan, which are both wholly-owned subsidiaries of Z Holdings, which is run by A Holdings. Naver and SoftBank each hold 50 percent of A Holdings.

“Naver can make use of the wide Yahoo Japan userbase, like integrating e-commerce technologies and ads to quickly expand its influence in Japan,” said Jung Yeon-sung, a business professor at Dankook University.

Yahoo Japan is the second most used search engine in the country after Google, with some 67 million users. Line is the biggest messenger app in Japan with around 90 million users, or 70 percent of the population, as of June.

“Naver can add these additional services to its shopping platform to lure in more customers,” said Seo Yong-gu, a business professor at Sookmyung Women’s University.

“Naver can simply implant its technology and content on a shopping platform when it rolls out services abroad without having to create something new,” said Jung. “This gives Naver a head start in an overseas market compared to many others that may have to start from scratch.”

Naver said it will apply its artificial intelligence search algorithms and recommendation systems to its overseas platforms. 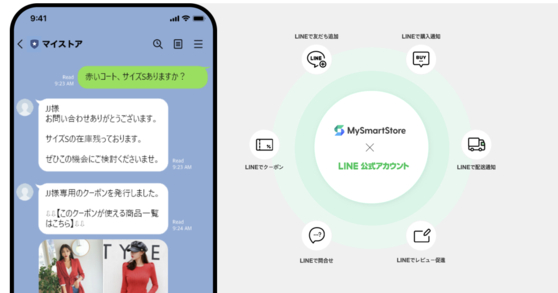 Outside Korea, Naver may possibly have to team up with its biggest domestic rival Coupang, some experts suggest.

“Instead of a direct investment, Naver usually chooses to team up with a company that already has what it needs, like its partnership with CJ Logistics to make up for its weak logistics,” said a source from one of Naver Shopping's domestic competitors who wished to stay anonymous. “Naver can find Coupang’s infrastructure for quick commerce useful, while Coupang can benefit from Naver’s partnership with Line.”

The fact that they are both backed by SoftBank also raises the chance of a partnership.

“It is possible that SoftBank CEO Masayoshi Son may consider partnering Naver and Coupang in Japan as their business model is different,” said Seo.

SoftBank Investment Advisers, which manages SoftBank Vision Funds, is Coupang’s largest shareholder and controls 32.8 percent of the company, according to MarketScreener.

“It will be more cost-efficient for Naver and Coupang to team up with a local partner, not with each other,” said Cho Chun-han, a business professor at Gyeonggi University of Science and Technology.

“It is more likely for Coupang to focus on its platform business, like over-the-top services, in the overseas market because building that many warehouses as it did in Korea entails a lot of risk. If both Naver and Coupang offer platform services, it will be difficult for them to cooperate.”