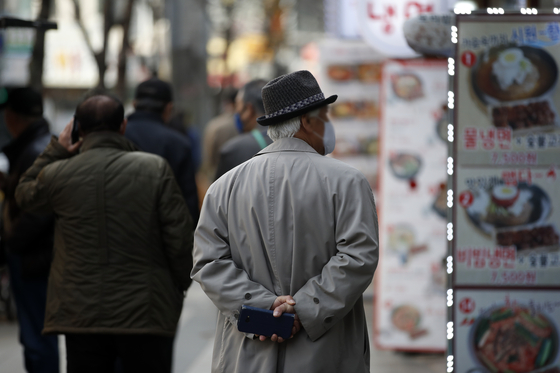 A senior citizen walks around the Jongno District in central Seoul on March 3, 2021. According to year-end resident registration data compiled by the Ministry of Interior and Safety, 109 out of 261 regional governments nationwide reported they are now super-aged, which means more than 20 percent of residents are 65 or older. [NEWS1]


Over 40 percent of Korean counties and cities are super-aged.

According to year-end resident registration data compiled by the Ministry of Interior and Safety, 109 out of 261 regional governments nationwide reported they are now super-aged, which means more than 20 percent of residents are 65 or older.

A country where over 7 percent of its population are senior citizens is defined as an aging society by the World Health Organization (WHO). If the percentage reaches 14 percent, it is considered an aged society, while countries with over 20 percent of the population above 65 are considered super-aged.

The country is set to become super-aged four years faster than Japan, the current record holder among OECD member states for going to super-aged from aged. It took that country 11 years, from 1994 to 2005, to make that jump. There are 10 other OECD countries categorized as super-aged, including Italy, France and Germany.

Accelerated aging is seen leading to a decline in Korea's potential growth rate, as the population relying on welfare benefits and pensions outgrows the working-age population, those between the ages of 15 and 64.

"The money that needs to be spent on welfare keeps increasing, while the amount collected keeps decreasing because the population is decreasing," said Lee Sang-lim, a researcher at the Korea Institute for Health and Social Affairs. "This means that there are limits to carrying out large-scale infrastructure development or financial or monetary policies."

According to an OECD estimate based on current policies, Korea's potential growth rate — the maximum possible rate an economy can grow without triggering inflation — will be 0.92 percent in 2033, go sub-zero starting in 2047 at minus 0.02 percent and hit minus 0.08 percent in 2060. The worldwide average is projected to be 1.47 percent in 2060.

The two other countries where potential growth rates are set to decline into negative territory in the near future are Latvia and Lithuania. Their populations are already decreasing.

Researchers Jang Min and Park Seong-wook at the Korea Institute of Finance (KIF) are more pessimistic. They forecast Korea's growth potential dropping to near-zero in 2030 and going sub-zero in 2045, at minus 0.56 percent. The Korea Economic Research Institute also projects that Korea will be growing by less than 1 percent in the next 10 years.

Countering the decline would require bringing the birthrate to above 2, far higher than Korea's birthrate of 0.84 in 2020. The most realistic solution therefore would be a soft landing as a super-aged society, according to at least one academic.

"We have to restructure our system so that we can adapt to the already-progressing low birthrate by preparing for the society that will come due to the decreased population and try to minimize the impact," said Cho Young-tae, a professor at the Graduate School of Public Health of Seoul National University.

"We have to prepare population strategies such as pushing retirement age higher, establishing senior-friendly ecosystems and shifting the accommodation paradigm."