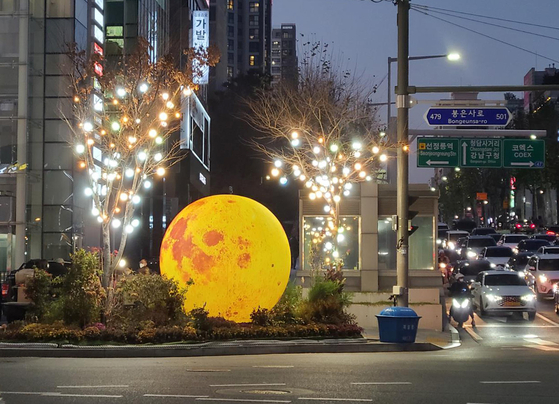 Apgujeong-dong, an affluent area in southern Seoul, was resurrected during the Covid-19 pandemic, with people spending the most in the neighborhood, according to big data analysis by SK Telecom.

The district used to symbolize wealth in the 90s where high-end restaurants and fancy clothes shops lined the streets, attracting celebrities and trendsetters alike.

It lost its shine in the early 2000s, with visitors choosing other up-and-coming neighborhoods. Many renowned restaurants relocated or shut down.

But the neighborhood has apparently taken back its crown in 2021, according to SK Telecom's big data that analyzed the number of shops, credit card sales and population.

Apgujeong-dong generated average daily sales of 13.6 billion won ($11.4 million) this year, ranking in the top spot among 100 neighborhoods analyzed by the telecom company.

SK Telecom has been rolling out the same analysis annually since 2012. This year marks the first time for Apgujeong-dong to rank in first place, the company said.

The district ranked 31st in terms of floating population with 230,000 people visiting the neighborhood on a daily basis. Average consumption per person in the neighborhood, however, was the highest, with 59,000 won spent.


"With the coronavirus, people started to spend more on luxury goods and as a result, Apgujeong-dong became a beneficiary with it having a lot of luxury shops, high-end restaurants and plastic surgery clinics," a source from SK Telecom said.

Cheongdam-dong, another affluent area, right next to Apgujeong-dong, came in 59th spot in the latest analysis in terms of sales. Its rank jumped from 120th spot in 2019.
Cheongdam-dong was a neighborhood that experienced the steepest jump in sales after Covid-19 broke out. Its floating population came to 33,000 people per day but average daily consumption per person was relatively high at 33,000 won.

The commercial district next to Konkuk University in Hwayang-dong in western Seoul experienced the steepest drop in sales after the coronavirus broke out. It was one of the most bustling university districts in Seoul, alongside of Shinchon in central Seoul.
The area near Konkuk University used to rank in 63rd spot in 2019 in terms of sales but dropped to 97th spot this year.

Myeong-dong, a neighborhood in central Seoul, which was a hotspot for tourists, also says a drop in sales.

The office district near Samseong-dong in southern Seoul also didn't do well during the pandemic.

Its sales dropped by nine ranks over the past two years.

The floating population in the neighborhood decreased by 13 percent compared to 2019, coming to 322,000 people per day.

"With more people working from home during the Covid-19 pandemic, the Samseong-dong area where there used to be a lot of office workers experienced a drop in sales," SK Telecom explained.