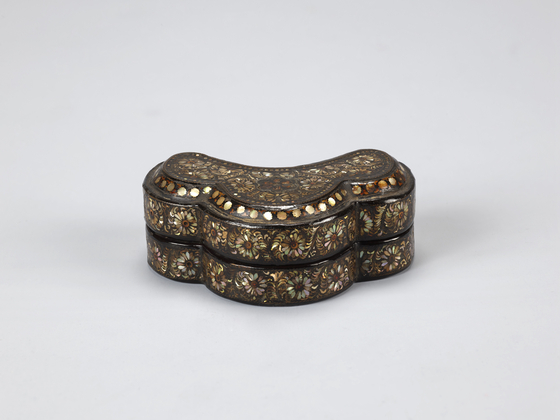 
Ottchil, or the technique of coating lacquer in varnish, utilizes the finest craftsmanship.

It takes several months just to collect the sap and refine the lacquer. Then, the process of coating a wooden item such as a bowl or a piece of furniture, takes a huge amount of patience as it requires a repetitive process of painting on a coat of lacquer, letting it dry, and applying another layer.

This traditional technique of coating wooden craft works with sap cultivated from lacquer trees has long been admired for the beautifully shimmering and sturdy finished products it produces. Wooden crafts finished with ottchil were in particular demand in the Joseon Dynasty (1392-1910) as they were known to be resistant to insects, water and humidity.

With the advent of many alternatives for wood, from plastic to stainless steel and glass, lacquered products have slowly been losing favor. 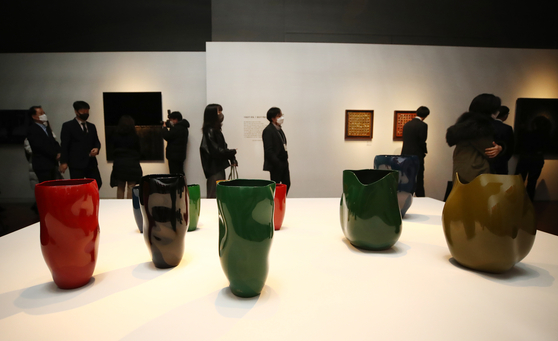 Visitors view the exhibition, "Ottchil, the Coated Splendor of Asian Lacquerwares," at the National Museum of Korea, central Seoul. [YONHAP]


To shed light on this vanishing traditional craft, the National Museum of Korea has organized a special exhibit titled "Ottchil, the Coated Splendor of Asian Lacquerwares.”

The ottchil technique was used widely across Korea, China and Japan. According to Noh Nam-hee, a curator of the exhibit, there are not many specimens of lacquered objects that show when the technique was first invented. In Korea, some of the earliest lacquered relics date back to the 3rd century BC.

The exhibit showcases 263 lacquered craftworks from the three countries that reveal how lacquer techniques developed in line with each country’s unique regional and local characteristics.

Usually when people think of ottchil crafts, reddish-colored objects may come to mind.

Beautiful mother-of-pearl jewelry boxes that every woman wants to own are also associated with lacquered craft developed in Korea. 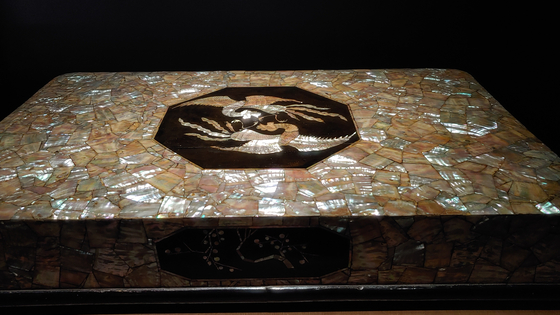 
According to Noh, Korea, China and Japan shared similar lacquerware cultures until the Unified Silla (668-935), but began to develop their own unique styles afterward. As for Korea, lacquerware inlaid with mother-of-pearl began to appear during the Goryeo Dynasty (918-1392), while Japan’s unique technique of “maki-e” or drawing paintings of the surface of lacquerware by using sap and sprinkling gold and silver power on the surface, developed during the Nara period (710-784). China's unique lacquer technique is known as "jo," which involves carving designs on thick layers of sap. 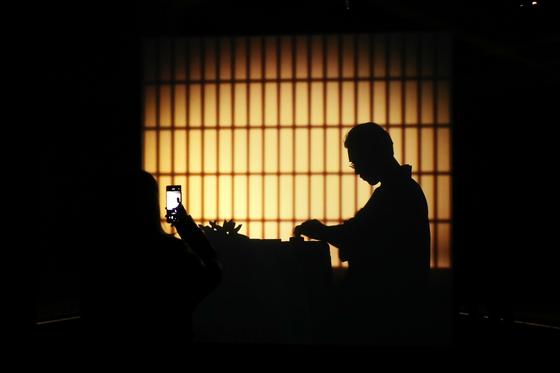 A video image of an artisan producing lacquered craftwork [YONHAP]


The exhibit is divided into four sections, walking visitors through an array of lacquered crafts produced in chronological order.

The first “Meeting Lacquerware” focuses on explaining the broad concept of what ottchil is. Visitors can witness the production process of lacquered craftworks through a video installed in this section. The pieces here demonstrate the complex manufacturing process that requires an extended period of preparation and repeated effort.

The second “Decorating Lacquerware” is where you can witness the diversity of lacquer.

Refined lacquer was originally colorless but turns brown when applied to wooden objects. The reddish-brown color we see today is because of the added iron oxide or copper-red pigment.

“The two contrasting colors were then used to draw pictures and patterns to decorate lacquerware. Korean lacquerware excavated from the Daho-ri ruins in Changwon and the Han-period Chinese lacquerware especially exhibit this technique,” said Noh. 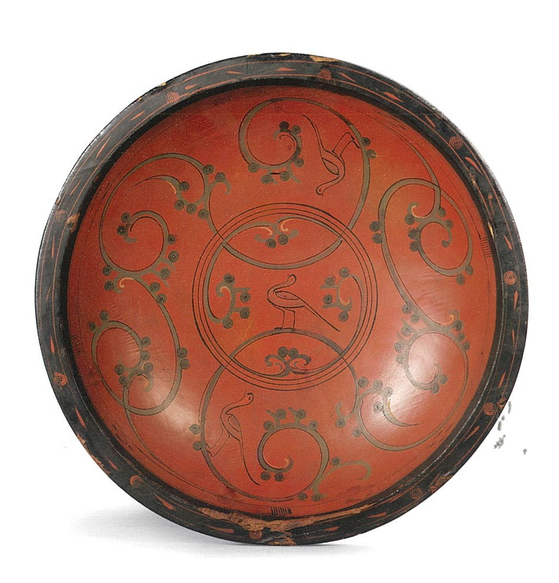 Dish with birds and cloud design, dating back to the pre-Han Dynasty in China [SHANGHAI MUSEUM] 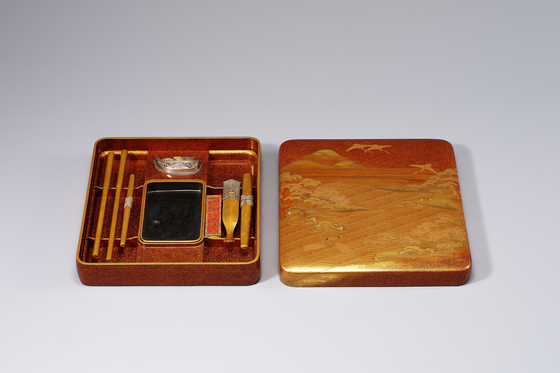 
The unique characteristics of lacquered craftworks from different countries can be witnessed in the third “Revealing Regional Characteristics” section.

Here, "Trefoil-shaped covered box with chrysanthemum decoration" dating back to Goryeo Dynasty is on display for the first time after returning home last year. According to the museum, the government purchased “this precious Korean cultural heritage back from Japan” in 2020.

“The characteristic of this period is that artisans thinly sliced mother-of-pearl and created some patterned shapes as designs,” said Noh. “People used other materials to decorate the lacquerwares, such as metal wire and tortoiseshell.” 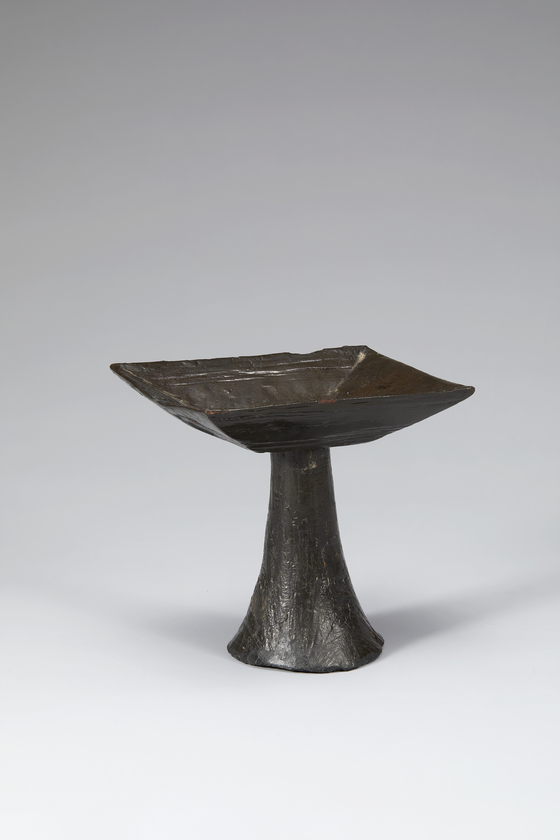 Also on display are more than 30 pieces of China’s carved lacquerware, which have rarely been exhibited in Korea. They traveled here from the Shanghai Museum.

There are lacquerwares from Thailand, Vietnam and Myanmar as well. It’s interesting to witness the difference between the mother-of-pearl inlaid lacquerware from Korea and Vietnam, says Noh.

The final section, “Transcending Boundaries,” traces the changes in lacquerware, going beyond regions and classes. It shows how lacquerware which was mainly used among the nobles during the early to mid-Joseon Dynasty, began to penetrate into ordinary people’s lives during the later part of the Joseon period.