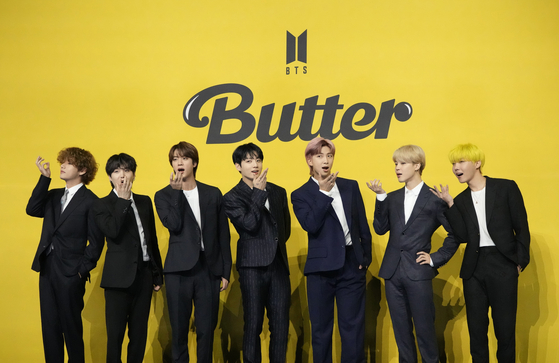 Members of BTS, V, Suga, Jin, Jung Kook, RM, Jimin, and J-hope from left to right. Three members of BTS have been infected with the coronavirus. [AP/YONHAP]


Two more members of the seven-member boy band BTS have tested positive for Covid-19 on Saturday. Suga was the first member to be diagnosed on Friday and is being treated at home.

All three had completed their second dose of a coronavirus vaccine in August.

After the series of live concerts in the United States that came to an end on Dec. 2, the boys were given vacation time. They returned to Korea on different dates and each took a PCR test upon arrival.

According to the label, RM returned to Korea on Dec. 17 and took a PCR test, which turned up negative, but when he tested again a day before his release from quarantine, the result was positive.

“He is showing no particular symptoms,” the label said.

As for Jin, he returned on Dec. 6 and was negative on both tests — one upon arrival and one right before being released from quarantine.

“However, Jin began to feel symptoms of a cold from Saturday afternoon, took a test again and got the result late in the evening,” the label added. “He’s currently being treated at home and has mild symptoms such as a fever.”

The label also confirmed that neither Jin nor RM have come in contact with any other BTS members after returning to Korea.