Openminjoo Party and Democratic Party to merge before election

Openminjoo Party and Democratic Party to merge before election 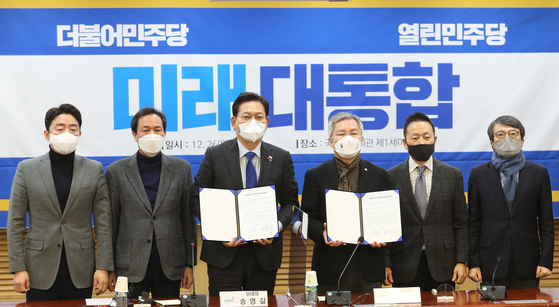 Center left, the ruling Democratic Party chairman Song Young-gil, and center right, the minor liberal Openminjoo Party chairman Choe Kang-wook, hold up the agreement they signed Sunday at the National Assembly in western Seoul on merging the two parties ahead of the March presidential election. [NEWS1]


Openminjoo Party, a minor liberal party, decided on Sunday to merge with the main ruling Democratic Party (DP) ahead of the March presidential election.

“The upcoming presidential election will be a major turning point that will determine whether the nation will develop in the next five years or retreat back to the old ways,” said DP chairman Song Young-gil at the National Assembly in western Seoul on Sunday. “We will do our best to meet the needs of the people by uniting the Democratic Party and the Openminjoo Party as one, focusing on candidate Lee Jae-myung in the coming election.”

Song and Openminjoo chairman Choe Kang-wook, along with other members of the two liberal parties, convened at the National Assembly on Sunday to sign an agreement on merging the two parties.

The agreement, signed by Song and Choe, states that the newly merged party will still be called the DP.

It also states that some Openminjoo Party members will join the election campaign committee of DP candidate Lee and that the merged party will focus on reformations to the current political system, including renovating the nomination system for the proportional representatives in the next general election to ensure that the general population vote is given the same amount of weight as votes of the party members.

The Moon administration in 2018 readjusted judicial authority between the police and prosecution, newly vesting the police with the authority to conduct and close initial investigations on all cases independently of the prosecution.

The change limited the prosecution’s ability to conduct direct investigations only to special cases related to the economy or finance, elections, high-profile corruption or those involving civil servants.

Final legal procedures to seal the two parties’ merger are expected to be completed mid-January.

“We expect the supreme committee meeting will be able to hold a meeting and finalize the agreement by Jan. 12 at the latest,” said DP Rep. Woo Sang-ho at the meeting on Sunday.

The Openminjoo Party was created a year and nine months ago, just before the last general elections. It was created by Jeong Bong-ju, formerly a DP representative, after he failed to get nominated for the election.

Jeong is no longer a member of the party, which today consists of just three members — Kang Min-jung, Kim Eui-kyeom and Choe Kang-wook. Jeong was nonetheless at the signing ceremony for the merger on Sunday, having participated in the party-to-party negotiation process.

The two parties’ possible merger was first officially floated by DP presidential candidate Lee in October, during his interview with Yonhap News.