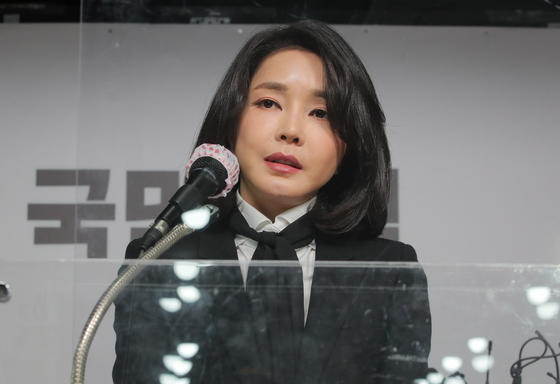 Bowing deeply before reporters assembled at a press conference held at the briefing room of the PPP’s headquarters in Yeouido, western Seoul, Kim apologized for what she described as “exaggerations” in her job applications to Suwon University in 2007 and Anyang University in 2013 and expressed regret for bringing negative publicity to her husband.

“I committed wrongdoings while trying to balance my career and studies,” Kim admitted at the conference. “I exaggerated my past experiences in order to stand out, and I now look back on that shamefully.”

On the résumé she sent to Suwon Women’s University in 2007, Kim claimed that she had served as a director for the Korea Association of Game Industry for three years starting in 2002, before it was officially established.

Kim also wrote in the 2007 résumé that she attended New York University's "Entertainment and Media Business Executive Program" from October to November 2006, but a similar program — titled "Entertainment, Media and Technology" — is only available to second-year MBA students at the university, which Kim was not.

In another résumé sent to Anyang University in 2013, she claimed that she had won the top prize in the animation category of the 2004 Seoul International Cartoon & Animation Festival, sponsored by the Ministry of Culture, Sports and Tourism, but the ministry had no record of Kim as a prize recipient.

Kim said she had put the PPP candidate in a “difficult position” with her misdeeds and that she blamed herself for misfortunes which befell her husband after their marriage in 2012, including the miscarriage of a child which she said had been conceived with difficulty.

“I believe that all the unfortunate things that happened to my husband after our marriage is my fault. I wanted to give him a child that he could carry on his back before he went to work, but I lost the baby due to the stress and fatigue that my husband faced in his work,” Kim said.

“I wish that my husband would be able to shine on his own merits, even if that means I have to disappear,” she added.

Expressing her concern that she would seem like a “stain” on her husband’s reputation, Kim said she would “deeply repent” and take time to reflect on her past misdeeds. She also promised that she would avoid stirring political controversy in the future.

“Even if my husband becomes the president, I will only be a dutiful wife,” Kim said. “Even if you are angry with me, please do not turn away from my husband, who has walked a hard path.”

The public apology from Kim marked a change in her attitude when compared to her Dec. 15 interview with cable news channel YTN, where she had said she wanted to shine in her job applications, though she also questioned the need to scrutinize her job applications from before her marriage to Yoon.

Kim and her husband have come under fire in recent weeks regarding allegations of falsified credentials in her résumés, which led to the Yoon offering a public apology on Dec. 17.

PPP senior spokesman Lee Yang-soo said Kim will still participate in the election campaign, but that she would refrain from taking on a more active role.