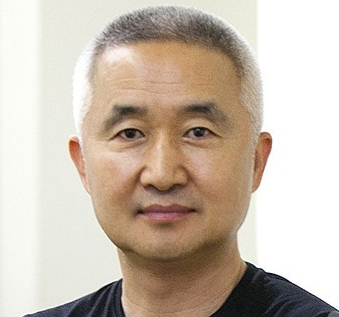 Choi Jin-seok
The author is an honorary professor of philosophy at Sogang University.

On August 27, 1928 — 10 years after the end of World War I — a multilateral agreement was signed by 15 countries to prevent war in the future. The Kellogg-Briand Pact was first proposed by U.S. Secretary of State Frank Kellogg and French Foreign Minister Aristide Briand and later joined by up to 63 countries to establish “the renunciation of war as an instrument of national policy.” The pact outlawed war for the first time in human history.

Ten years after the signing of the treaty, World War II broke out. (Germany and Japan also were the signatories of the pact.) The only peaceful result of a pact aiming for peace was the awarding of Nobel Peace Prize to Kellogg. The treaty could not prevent wars down the road.

On September 29, 1938, a decade later, the Munich Agreement was signed by German Chancellor Adolf Hitler, British Prime Minister Neville Chamberlain, Italian Prime Minister Benito Mussolini and French Prime Minister Édouard Daladier. After returning to Britain, Chamberlain extolled his achievement of “peace for our time,” but the treaty only helped Germany buy the time needed to reinforce its military power. Six months later, Germany started World War II with its occupation of Czechoslovakia. “We have sustained a total and unmitigated defeat,” Winston Churchill exclaimed in a speech at the House of Commons delivered six days after the return of Chamberlain. “And do not suppose that this is the end. This is only the beginning of the reckoning.” But the unenlightened populace only ridiculed him as a warmonger.

Moon without credibility on security
If leaders believe they can control any pacts or treaties with other countries, they indulge in fantasy or cannot tell facts from wishful thinking or are adept at cheating people. A peace treaty can bring about a fleeting moment of peace — not a permanent peace — in human history. Countries ardently championing peace have mostly lost peace — and were forced into submission. They learn lessons from history, but ignore them for political goals.

President Moon Jae-in also seems to comprehend the vanity of treaties or pacts. In a Fox News interview on September 25, 2018, he said, “A declaration to end the Korean War can be cancelled at any time as it’s just a political announcement.” It was very awkward for a head of state to justify cancellation of a certain declaration. But in the 6th ROK-U.S. Strategic Forum in Washington in November this year, First Vice Foreign Minister Choi Jong-gun underscored the need to create a “diplomatic frame” in which “no one can escape from an end-of-war declaration.” What does such a big gap between the head of state and his aide represent? Probably it suggests their determination to pressure related parties sign on an end-of-war declaration — and persevere — even if it brings about serious side effects no one can get away from.

I oppose an end-of-war declaration President Moon wants to make for the following reasons. First, it certainly will not be effective, as he said it can be cancelled at any time. Second, the frame no parties can flee from can pose dangers to our security. On national security, the president has consistently failed to get trust from the people. 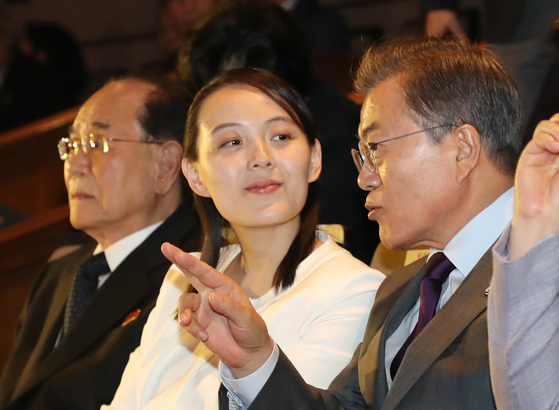 President Moon Jae-in speaks with Kim Yo-jong, left, North Korean leader Kim Jong-un’s sister, while watching a North Korean orchestra’s performance in Seoul in February 2018. After her visit to the Blue House during the 2018 PyeongChang Winter Olympics, North Korea said Moon’s proposal of an end-of-war declaration was not a bad idea if South Korea and the United States end their hostilities toward Pyongyang. [YONHAP]

Celebrating the day with K-pop stars
Behind the sensitive issue of an end-of-war declaration are North Korean nuclear weapons. On the threat from North Korea, the late presidents Kim Dae-jung and Roh Moo-hyun — and current President Moon Jae-in — took the same position. While concealing — or at least dismissing — the nuclear threats from the start, they said in chorus, “North Korea does not have the will or ability to develop nukes.” President Roh fought hard against the U.S. over the issue and advocated Pyongyang’s position on the international stage as he confessed later. President Moon accepted — or intentionally brushed off — the North’s armaments. His arguments for the use of an end-of war declaration to resume denuclearization talks do not make sense, as they represents a critical lack of strategic consistency — in other words, an ominous illusion.

President Moon used his “five recruitment principles” only to get votes in the 2017 presidential election and abandoned them shortly after his election victory. What Moon said in his inaugural speech was not kept at all. Instead, lies — and blaming others — prevailed throughout his five-year term. Politics feeds on rhetoric, but since his words lost credibility, it is very hard to trust what he says about the end-of-war declaration. Given the way he spoke, it is reasonable to assume that the declaration he wants to draw will be different from what he says.

On national security, Moon took a path other than safeguarding our national integrity and interests. Such examples are plenty. On Armed Forces Day on Oct. 1, he spent time celebrating the day with K-pop stars at night for the first time even without staging a military parade so as not to provoke a nuclear-armed North Korea. Despite his position as the commander in chief, he has been bent on repressing people who fought for the country and instead engrossed with honoring people who fought against the country as activists — largely thanks to his slanted ideological perspective.

A declaration shaking security
An incident epitomizing Moon’s unique approach to national security took place on June 4 in the headquarters of the National Security Service (NIS). When the top spy agency changed its motto from “Anonymous Dedication to Freedom and Truth” to “Limitless Loyalty and Devotion to the Nation and the People,” it borrowed the calligraphic style of activist and economist Shin Young-bok who had been released on parole by admitting to his involvement in a 1968 underground Communist movement linked to North Korea after serving 20 years of a life sentence for violating the National Security Act. Moon’s use of Shin’s calligraphic style dumbfounded the spy agency and the public. As chief commander, Moon not only praised the former inmate as a great thinker at home and abroad, but also proposed to take pictures with a North Korean delegation led by Kim Yo-jong — North Korean leader Kim Jong-un’s sister — in front of Shin’s work of art at the Blue House when North Korea participated in the 2018 PyeongChang Winter Olympics. That was totally out of sync with anyone’s presidency.

Due to Moon’s diehard ambiguity over the Cheoan sinking from a North Korean torpedo attack, Capt. Choi Won-il and his surviving sailors are still demanding a clear answer from the president over who committed the attack. They are wondering whose side the president wants to take. Wouldn’t an end-of-war declaration be made in line with what North Korea wants — rather than for South Korea’s sake?

All political systems backfire if they are not backed by collective rationality. Democracy thrives on mature citizenship, but without it, democracy turns into mobocracy. Due to deep-rooted ideological warfare, our democracy is morphing into mobocracy. Given Moon’s past trajectory, an end-of-war declaration will likely bring about dire side effects.

If the proclamation is made, the issue of how to dismantle the U.S.-led United Nations Command (UNC) in South Korea will be brought up first followed by a strong demand to disband the Korea-U.S. alliance and countless placards along the street calling for the pullout of the U.S Forces Korea (USFK). Abroad, North Korea, China and Russia will insist on the three demands. That is a destined path regardless of whether a clause pledging to maintain the military status quo is included in the declaration. Moon and his aides are former democracy activists who once championed the termination of the alliance and withdrawal of the USFK.

Does a pact bring an end to war?
Why does Moon so ardently adhere to a declaration which “can be cancelled at any time”? And why does his diplomatic aide try to create a situation from which the country cannot escape? Somewhere between the two incompatible destinations lies the truth, which can help disarm South Korea. Moon and his staff will try to paint over the negative picture with the sugarcoated illusion of “unifying the same people.” Such desires have long been embedded in our politics since the liberation of the country in 1945.

As Lao Tzu, the founder of Taoism, said, “Truthful words are not beautiful while beautiful words are not truthful.” How beautiful such words as “peace” or “end-of-war” really are! And how naïve — and dangerous — is a leader who has the conviction that an end-of-war declaration will bring an end to war.