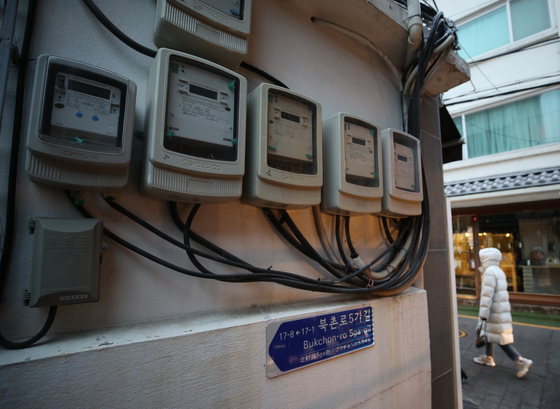 Electricity meter at a building in Seoul on Monday. Utility prices are to be hiked starting next year but after ther presidnetial election in March. [YONHAP]

Utility bills are going up after the presidential election in March.

Electric bills will be 5.6 percent higher than this year’s, which will translate into an additional 1,950 won per month for a family of four -- and possibly more.

The average annual base rate is usually determined once a year.

But according to the Korea Electric Power Corp. (Kepco) on Monday, the government decided to raise the annual average fuel costs twice next year -– once in April and again in October.

The second part of the bill is a quarterly charge based on the average fuel cost for the previous three months and that depends on international fuel prices, which have been volatile.

Last week, the government announced it was freezing the quarterly portion of the electricity bill for the first three months of next year citing inflationary pressure.

Kepco stressed that the hike has been staggered to go easier on the average household.

Korea Gas Corp. also announced that gas prices will rise -- in May, July and October.

The Finance Ministry has been trying to freeze utility bills to prevent inflation.


In November, consumer prices rose 3.7 percent, the highest rate in a decade.

However, keeping utility price low will only increase the red ink at Korea’s energy companies.

In the first nine months of the year, Kepco's net loss was 2.2 trillion won, compared with a 1.9 trillion won net profit in the same period a year earlier.