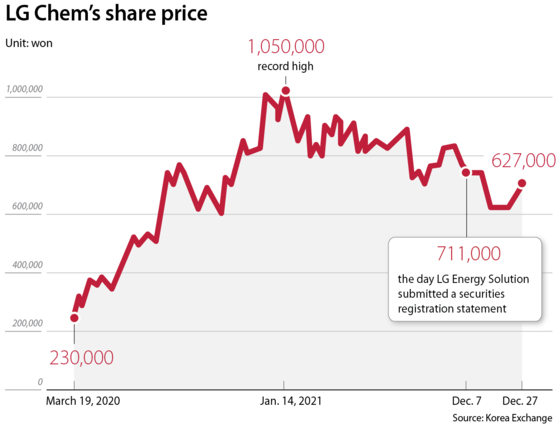 People claiming to be shareholders are posting comments saying they oppose the listing of the business, as it's a cash cow that will potentially benefit them as owners of the company.

An anonymous post on the Blue House petition site said that the initial public offering (IPO) of LG Energy Solution harms the interests of shareholders of LG Chem. More than 2,200 people hit the "I agree" button showing support for the statement.

"Most of the so-called ant investors invested in LG Chem considering the future of the battery business," the post read. "The listing of LG Energy Solution will harshly affect these ant investors."

In December, LG Energy Solution submitted a securities registration statement to the Financial Services Commission (FSC). It aims to go public as early as the end of January 2022.

In the proposed IPO, 18 percent of the company will be sold to the public.

SK Innovation's shares experienced sharp drop before and after it split off SK On, a battery company, in October.

"The movement of splitting off certain businesses that have high growth potential and listing them is an act of stabbing shareholders in the back," an SK Innovation retail investor told the JoongAng Ilbo.

On Nov. 19, CJ ENM said it will be establishing a new split-off with variety show, TV series, film and animation assets in a bid to form an effective multi-studio system.

SK Chemicals split off SK Bioscience in 2018. The vaccine maker went public on the Kospi market in March. SK Chemicals, which traded around 460,000 won in February, is down nearly 70 percent, closing at 153,500 won on Monday.

In September, Hanwha Solution said in a regulatory filing that it is considering the splitting off of its advanced materials business. Although the company said it is still "reviewing the plan" and "there's nothing specific that has been decided," the share price declined more than 15 percent in three months.

"It is essential that companies listen more carefully what investors think," said Choi Nam-kon, an analyst at Yuanta Securities.

Companies argue that split-offs are inevitable in order to increase the global competitiveness of their individual businesses.

"Split-offs allow companies to give more focus to the particular business area, build a suitable management system, and increase expertise so that we can respond quickly to the fast-changing industry," said a source from SK Innovation.

The FSC and Korea Exchange are currently reviewing a plan to strengthen regulations for split-off companies that wish to go public.