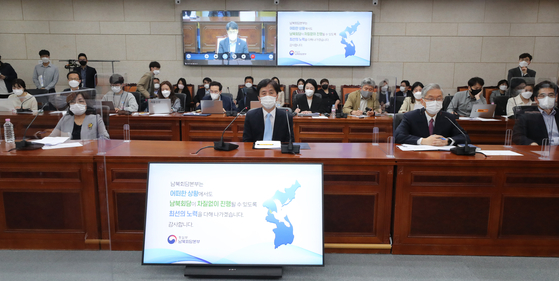 A virtual inter-Korean summit is unlikely to come to fruition within this year despite the Moon Jae-in government's efforts to revive dialogue with the North and move along an end-of-war declaration.

The Moon government has pushed a declaration to formally end the 1950-53 Korean War as a means to reengage the North and considered the Beijing Winter Olympics next February as a possible venue for such diplomacy to unfold.

A virtual summit between Moon and North Korean leader Kim Jong-un could have been a step toward laying the groundwork for such declaration, which would also involve other key players to the armistice agreement, namely the United States and China.

The two leaders exchanged letters in April, leading to the revival of inter-Korean hotlines in July, unilaterally severed by Pyongyang on June 9, 2020. The communication lines were once again severed soon after, as the North protested a joint military exercise between South Korea and the United States, but were again restored in early October.

The Unification Ministry has worked toward a possible inter-Korean videoconference summit since earlier this year and revealed to media in April that a conference room designed to hold virtual talks with the North. It likewise stressed that North Korea has the technical capability to hold a videoconference meeting.

In late July, Unification Minister Lee In-young said that Seoul proposed ways to set up a virtual conference system for inter-Korean talks, noting that while a face-to-face meeting is preferred, Pyongyang is sensitive to Covid-19 disease control measures.

Senior Pyongyang officials, including Kim Yo-jong, sister of the North Korean leader, have indicated openness to engagement with the South. Kim Yo-jong in September called Moon's end-of-war proposal at the United Nations an "admirable idea" and indicated that Pyongyang is open to "constructive discussions" with Seoul, under the right conditions.

Kim Jong-un also directly referred to an end-of-war declaration in a Supreme People's Assembly later that month and warned that even if the war ends, hostile acts by Seoul and Washington would lead to continued "distrust and confrontation" between the two Koreas.

Pyongyang has called on Washington to withdraw its "hostile policy" as a condition to return to denuclearization negotiations, interpreted as a called to lift some sanctions and withdraw U.S. troops from the peninsula. It also seeks to be recognized as a nuclear power state.

The Moon government indicated that it was in the "final stages" of discussions with Washington on an end-of-war proposal, a longtime initiative of the administration which has less than half a year left in its five-year term.

South Korean First Vice Foreign Minister Choi Jong-kun said during a trip to Washington last month to discuss the matter, "I think there will be good results soon," noting it would soon be the end of the year.

However, some U.S. congressmen and experts have expressed skepticism about an end-of-war proposal and also its repercussions, including what it would mean for the status of U.S. troops in Korea.

Robert Abrams, former commander of United States Forces Korea, told the Voice of America in an interview Saturday, "I am very unclear what it is we are trying to accomplish by declaring an end of war."

He said that "any premature declaration of an end of war" opens up the possibility for people to propose to "revisit" UN Security Council resolutions from the summer of 1950 and question the existence of the United Nations Command, "and then it becomes a slippery slope" without "one inch of progress on denuclearization."

"North Korea seems to have determined that there is no justification, nor any real benefit to be gained from an inter-Korean summit at the moment," said Park Won-gon, a North Korean studies professor at Ewha Womans University, and continues to observe the situation with South Korea and the United States by setting forward "virtually unacceptable conditions," possibl preparing to enlist"brinkmanship tactics."

Another hurdle is the mounting pressure on U.S. allies to join its diplomatic boycott of the Beijing Olympics, with Japan the latest country to announce it will not send a government delegation to the Winter Games.

In a press conference in Australia earlier this month, Moon said that the United States, China and North Korea agree "in principle" on declaring a formal end to the Korean War.

Seoul and Beijing held its first "strategic dialogue" in more than four years between its vice foreign ministers last week. Vice Foreign Minister Choi expressed hopes for a successful Beijing Olympics to his Chinese counterpart, Le Yucheng, in the virtual talks last Thursday. They exchanged opinions on ways to restart the Korean Peninsula peace process and discussed Seoul's push for and end-of-war declaration.