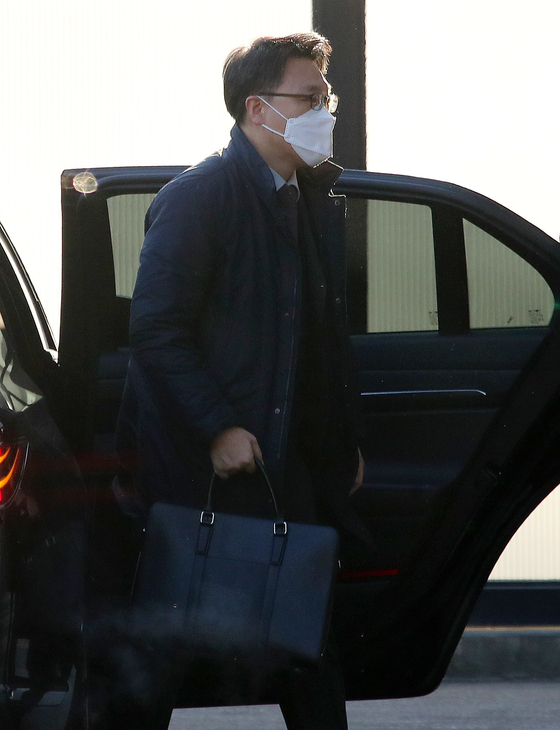 Kim Jin-wook, chief of the Corruption Investigation Office for High-Ranking Officials, arrives at the office's headquarters in Gwacheon, Gyeonggi, south of Seoul on Monday morning. [NEWS1]


The new anti-corruption watchdog is being attacked from both sides of the political aisle over revelations that it conducted surveillance of journalists, politicians and their relatives in attempts to uncover the source of leaks to the media.

Some are calling for the abolition of the Corruption Investigation Office for High-Ranking Officials (CIO) just months after it began its work.

While a final total of the number of people whose phone logs were examined by the CIO isn't yet available, to date it has collected phone records from 173 journalists and opposition politicians through a total of 287 requests made to telecommunications companies.

While the CIO responded Friday to criticism of its requests by claiming it exercised its powers “in accordance with legally established procedures,” its attempts to identify the source of media leaks appear to have reached far beyond journalists who obtained sensitive information — in some cases extending to the journalists’ family members

The CIO’s phone record requests have raised suspicions that the office not only tried to compromise journalists’ sources of information, but also conducted regular surveillance on those perceived as being unfriendly to the ruling party and government.

The phone records of one JoongAng Ilbo reporter who works on the newspaper’s Social Affairs desk were collected by the office in August — along with those of his mother, a housewife.

In his report, the JoongAng Ilbo journalist cited a court arraignment, written by Lee and not yet made public, which detailed pressure applied by then-Senior Secretary for Civil Affairs Cho Kuk on the Justice Ministry in 2019 to drop a planned probe into Anyang District prosecutor Lee Gyu-won, who was due to undertake studies abroad in the United States.

Lee Kwang-cheol was eventually indicted in July for abuse of power by the Suwon District Prosecutors’ Office for being involved arranging the illegal travel ban on Kim Hak-eui.

The revelation that the CIO rifled through the phone records of the JoongAng Ilbo reporter in order to find the source who leaked Lee Sung-yoon’s arraignment raised fears that the office’s activities could intimidate would-be whistleblowers from speaking to media.

The CIO’s efforts to uncover the source of the leak has come under criticism from not only the main opposition People Power Party (PPP), which has argued since the office’s inception that it is biased in favor of the government, but also the ruling Democratic Party (DP).

In a radio interview with YTN on May 26, DP lawmaker Cho Eung-cheon pointed out that the submission of an arraignment to a court “is premised on its disclosure” and that attention to how it became public knowledge was misplaced.

Justice Minister Park Beom-kye expressed his disappointment with the CIO in a television interview with KBS on Sunday.

“The CIO has failed to sufficiently live up to the expectations of the people, and I myself am disappointed regarding certain aspects [of the office],” Park said in response to a question about the CIO’s viability.

The justice minister’s statement highlighted the government’s discomfort with the CIO’s activities.

Park himself was one of the chief proponents of the office’s establishment since 2017, when he became head of the DP’s task force to clean up what the party has characterized as the country’s “deep-rooted evils,” which according to the party include the state prosecution service ability to conduct politically sensitive investigations.

Further revelations of the CIO’s activities have also invigorated calls from the state prosecution service and the PPP for the disbanding of the CIO altogether.

“The CIO deliberately ran illegal surveillance on opposition figures who bear no relationship to the suspects of its probes,” Kim said. “The only solution now is to disband the office.”