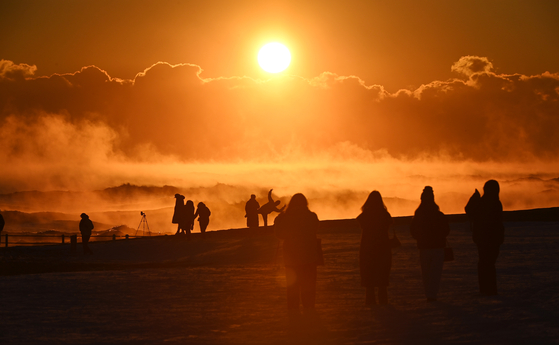 Visitors to Gangmun Beach in Gangneung, Gangwon, watch the sunrise ahead of New Year's, as major spots popular for viewing the first sunrise of the year are shut down from Dec. 31 to Jan. 2 to keep people from gathering. [YONHAP]


Once again, all trails at Korea's national parks will be closed over New Year's in order to prevent people from gathering to watch the first sunrises of the incoming year.

The special quarantine restrictions on national parks, similar to the one issued at the beginning of this year, were reimplemented in an attempt to stop locals from gathering to watch the last sunset and the first sunrise from mountains or beaches, in hopes of preventing any further spread of Covid-19 within the country.

Hallasan National Park, managed separately by the government office of Jeju Island, will also be blocked at night.

Staff of the national parks will be stationed at the entrances to the mountain trails and parking lots to prevent anyone from entering during the restricted hours. Anyone who violates the ban for the first time will be given a 100,000-won ($80) fine. Those found entering the premise twice will be fined 300,000 won, and three will be given a 500,000-won fine.

The blocked entrances won't prevent people from witnessing the sun rising from the national parks, however.

The “Korea National Park TV” YouTube channel will livestream the event from four major national parks popular for watching the year's first sunrise: Cheonwang peak of Mount Jiri, Daecheong peak of Mount Seorak, Hyangjeok peak of Mount Deogyu and Dara Park in Hallyeohaesang. The livestreaming will start in the afternoon on Dec. 31.

More information on the special restrictions can be found on the website of the Korea National Park, www.knps.or.kr.

Other popular sunrise-watching spots like Jeongdongjin in Gangneung, Gyeonggi; Ganjeolgot in Ulsan; Homigot in Pohang, North Gyeongsang; and Namsan Park in central Seoul have announced their entrances will be closed.