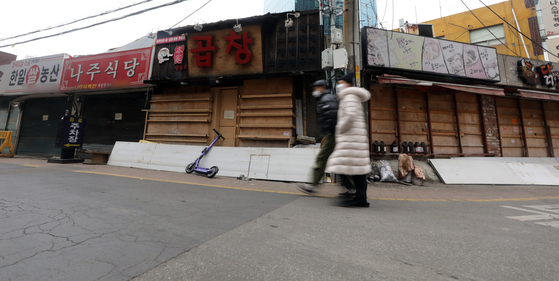 
Korea's industrial landscape changed dramatically over the past five years as the manufacturing, retail and service sectors shrank, while internet, communication and renewable energy businesses grew.

According to an economic census conducted by the government every five years, there were 6 million companies in Korea last year, 17.8 percent more than the 5.1 million reported in 2015. The number of workers rose by 8.9 percent from 22.8 million in 2015 to 24.8 million in 2020.

Face-to-face services that cater directly to consumers, such as restaurants and shops, are on the decline, victims of our connection to devices and the internet.

There was also shrinkage in the manufacturing sector, especially the shipbuilding industry.

On the flip side, the number of businesses specializing in information and communications jumped by 45.1 percent, as well as companies related to science and technology, which saw a 40.6 percent surge over the last five years.

The industry that soared the highest, however, was the electricity, gas and steam sector. Businesses in that sector rose by 375 percent from 16,000 to 74,000 over the last year years, driven by the Moon Jae-in administration’s subsidies for solar-power companies.

The fourfold increase came from individuals installing solar panels on their properties and registering as electricity generators. The number of steam and nuclear power plant companies stayed the same.

The industrial shift is seen even more clearly in what workers do. Out of 19 business categories, only five saw a decrease in the number of workers: manufacturing, food and lodging, finance, mining, and a category dubbed associations and others.

The number of workers in the finance industry shrunk by 5.5 percent from 2015 to 2020, due to banks transitioning online and hiring less.

The industry that saw the biggest surge in workers was health and social welfare, which reported a 48.3 percent jump.

“The weakening of the shipbuilding industry, which takes up a big portion of manufacturing, affected not only businesses in that field but others related to them,” said Kim Sang-jin, head of the economic census department at Statistics Korea.

“Face-to-face services have become less popular due to changes in the society as well as increased use of automated machines at stores, which led to fewer people being hired by businesses.”

Ban on exports of fabric used in masks to be lifted