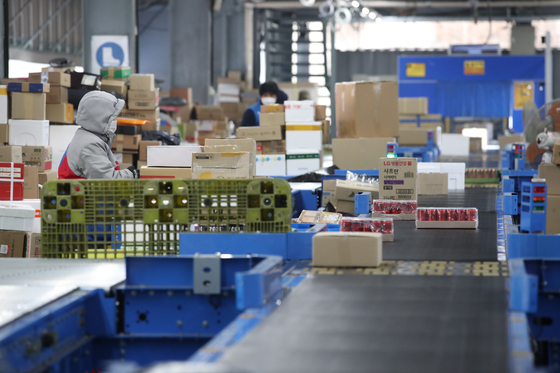 A delivery worker sorts packages at a CJ Logistics warehouse in Gwangju, Gyeonggi, on Tuesday. [YONHAP]


CJ Logistics delivery workers are going on strike for the fourth time this year, leading to the delay of approximately 500,000 packages.

An estimated 1,700 people employed by subcontractors delivering packages for CJ Logistics, or 8.5 percent the 20,000 total employed for this work, joined the strike, which started Tuesday and affected CJ Logistics facilities nationwide.

Those striking are members of a union affiliated with the Korean Confederation of Trade Unions, the more radical of the two major labor groups.

The delivery workers claim the company is not compensating them fairly following an increase in rates charged to customers.

CJ Logistics, the largest logistics company in Korea, increased prices by an average 140 won (12 cents) per package in April.

The company argues that a fair share of the price increase is reflected in delivery-worker compensation.

"They are remunerated in proportion to the delivery fee, so their pay rose accordingly," said Lee Dong-soo, a spokesperson for CJ Logistics. "They are typically given a 50 percent of the total delivery fee."

Though the strike came at year-end, when demand for deliveries usually jumps as people exchange gifts, its impact on the supply chain is seen as limited.

"Of the 20,000 CJ Logistics delivery workers nationwide, 1,700 is not a big number," said a source from the logistics industry who wished to remain anonymous. "And whether all those 1,700 will take part in the strike, which requires taking days off, is uncertain."

"The company will respond to unlawful acts in which the products of customers are taken hostage," CJ Logistics said in a statement Tuesday.

E-commerce companies, including 11st, Gmarket and Auction, advised sellers to inform customers that deliveries could be delayed as a result of the strike.

The Korea Enterprises Federation (KEF), a local business organization, called on the delivery workers to end the strike.

The KEF "urges the labor union to withdraw the strike, which will cause damage to people's livelihoods and the national economy in pursuit of their own benefit and using a certain company as an excuse," it said in a statement on Monday. KEF added the impact of the strike on people's daily lives will be "intense" as Covid-19 increased the need for internet shopping.