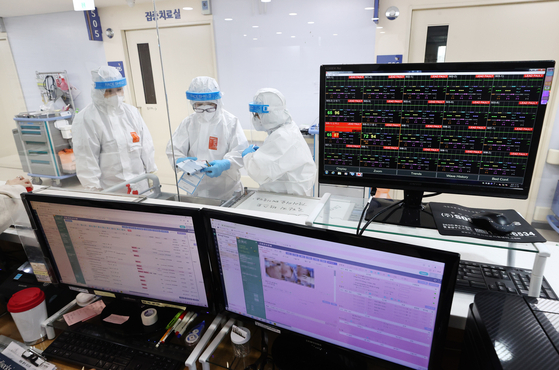 Medical professionals at the Hyemin Hospital in Gwangjin District in eastern Seoul, which specializes in treatment of Covid-19 patients, go about their duties Tuesday. Critically ill patients remained above 1,000 for the eighth consecutive day, though general coronavirus infections appear on a downward trend. [YONHAP[

Daily Covid-19 cases dropped to the 3,000s for the first time in nearly a month Tuesday amid tightened social distancing measures, while critically ill patients remained above 1,000 for the eighth consecutive day.

Health authorities said new infections appear to be on a downward trend, but added it might take five to 10 days for that trend to be reflected in the number of critically ill patients.

Son Young-rae, senior epidemiological strategist at the Central Disaster Management Headquarters, said in a briefing Tuesday, "There has been a transition to a downward trend from a situation where there was a continuous spread in infections."

There were 3,865 new infections, bringing total cases to 615,532, according to the Korea Disease Control and Prevention Agency (KDCA). The country recorded 46 more fatalities, bringing the total death toll to 5,346.

This marked the first time daily cases fell below 4,000 since Nov. 30, and a significant drop from the 4,207 cases recorded Monday. There was less coronavirus testing over the Christmas weekend amid subzero weather.

The figure contrasts with a record high of 7,849 cases reached on Dec. 15. 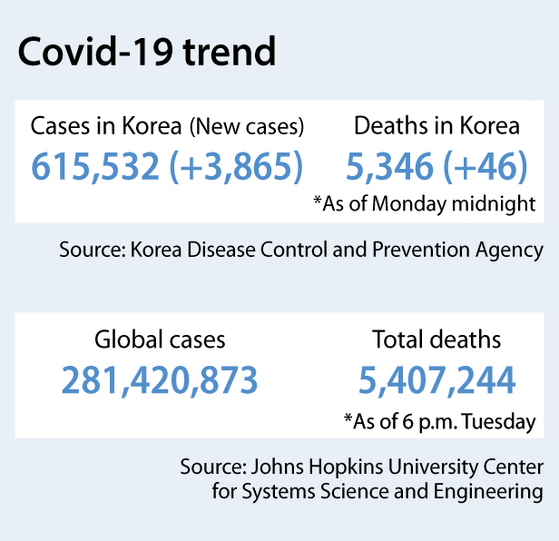 However, there were 1,102 critically ill patients reported Tuesday, second to an all-time high of 1,105 reached on Saturday.

The I.C.U. capacity nationwide was slightly lower at 76.7 percent, down 2.2 percentage points from the previous day.

There was a drop in critically ill patients waiting for beds to the single digits, decreasing to nine people from 107 the previous day.

This marks the first time in nine weeks that the weekly average number of cases decreased. Average daily cases from Dec. 19 to 25 were 6,101, a decrease of 11.1 percent from the previous week's average of 6,855.

The percentage of critically ill patients over the age of 60 was down in the past week to 25.5 percent compared to 30.5 percent the previous week. As of Tuesday, 71.6 percent of people over 60 had received booster shots.

The government reinstated a set of social distancing restrictions nationwide on Dec. 18, limiting private gatherings and imposing nighttime curfews on restaurants and most businesses through Jan. 2.

This put a halt to the government's "living with Covid" scheme that began in November, aimed at a phased return to normalcy.

Health authorities also said that the current two-week self-isolation period for those infected with the Omicron variant or individuals who come in close contact with a confirmed Omicron patient will be shortened to 10 days. This is the same standard as applied to asymptomatic patients of other variants such as Delta, after health officials found Omicron doesn't behave differently from these variants after a month-long analysis.

There were four additional omicron infections in Korea bringing total cases linked to the variant to 449.

The KDCA said as of Tuesday that 85.8 percent of the population received at least their first Covid-19 jab, 82.5 percent are fully vaccinated and 31.1 percent received booster shots.