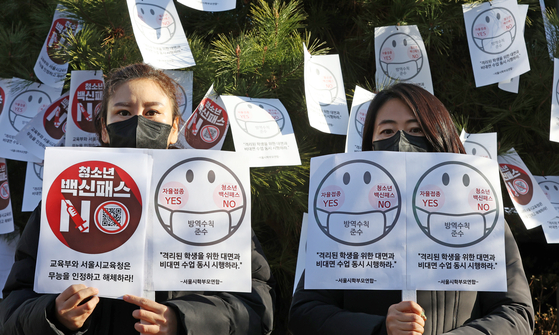 Parents of students gather in front of the Seoul Metropolitan Office of Education on Dec. 22 to argue that vaccines should not be forced on teens. They also argued that both online and offline classes should be available for students who have to quarantine. [NEWS1]


Ms. Lee, a 16-year old high school student, reacted badly to her second vaccine shot last month. She was hospitalized for two weeks and missed school for a total of three.

“My child was sick due to the after-effects of a vaccine shot and missed final exams at school, but the government did not give any advice or help,” said Jeon Seung-hee, her mother.

“The government was the one that pushed [youngsters] to get vaccines, yet all the burden falls on the parents when there is a bad reaction.”

Another teenager, who got his second jab in August, is still suffering from side effects. The 18-year-old was diagnosed with pericarditis and had to stay in a hospital for about six weeks. He had missed the national college entrance exam last month and is still on steroids.

Worries about vaccines and teens are only growing after the government announced earlier this month that vaccine passes will soon be mandatory for individuals between 12 and 17 for a range of normal activities.

Horror stories of side effects are shared online, and this week, five more cases of teenagers suffering from vaccine after-effects were described on the Blue House petition site.

On that site, one mother in Changwon, South Gyeongsang, said her daughter in middle school went into a coma after she got her first vaccine shot last month. The daughter had diabetes. She needed to be vaccinated, the mother said, to attend cram schools, which will require vaccine passes soon.

According to the Korea Disease Control and Prevention Agency, reports of adverse reactions from vaccines in people between the ages of 12 and 18 are lower than in any other age groups: 316 cases for every 100,000 shots compared to 592.6 for people in their 20s and 669 for people in their 30s. However, cases of myocarditis and pericarditis are more common in teens.

The Ministry of Education is shifting its vaccine pass plans for teens. Originally, it planned to require teens to use vaccine passes for a range of activities from Feb. 1. That required first shots by Dec. 27.

But a backlash from parents made the ministry reconsider its schedule.

“All options are open,” said a Ministry of Education spokesperson in a media briefing Monday. “[The announcement] can happen within this year or early next year.”

Despite controversy and scary online stories, 71.1 percent of people between the ages of 12 and 17 got their first shots as of Dec. 28, while 47.8 percent are done with the second. Sixteen and 17 year olds are the most vaccinated, with 84.6 percent done with their first dose and 71.2 percent finished their course. Twelve year olds are the least vaccinated, with 43 percent done with the first shot and 19.3 percent finished their course.