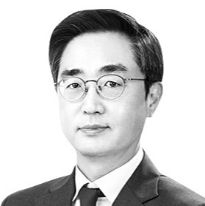 The author is policy news director of the JoongAng Ilbo.


While reviewing data for this year, two figures stood out. The average increase of apartment prices nationwide through November was 19.4 percent — the biggest jump since the 22.8 percent in 2002.

Another figure was 4.8 percent, the increase of the Kospi this year through Friday. It is far lower than the MSCI’s 15 percent increase. The Kospi’s increase was less than the 25.8 percent of the S&P 500 in the U.S, the 21.9 percent in Taiwan and the 4.9 percent in Japan. Among the Group of 20 economies, Korea’s stock index growth rate was ranked 18th.

What if the apartment price increase was 4.8 percent and the Kospi increase was 19.4 percent? The Moon Jae-in administration would have avoided the mounting public demand for changing the government. That’s is a painful issue for the Moon administration.

In response to fierce criticisms about the skyrocketing housing prices, the Moon administration repeated one answer. It said the price increase was caused by surges in global liquidity and not just a problem of Korea. But the explanation does not work when we think about the plummeting stock markets. Although major companies performed well, the markets were weak.

Increased liquidity is not the only reason for asset price increases. Expectation for higher asset prices — or the fear of it — causes asset prices to soar. In the case of the real estate market, policy failure and loss of confidence in the government worsened the situation. 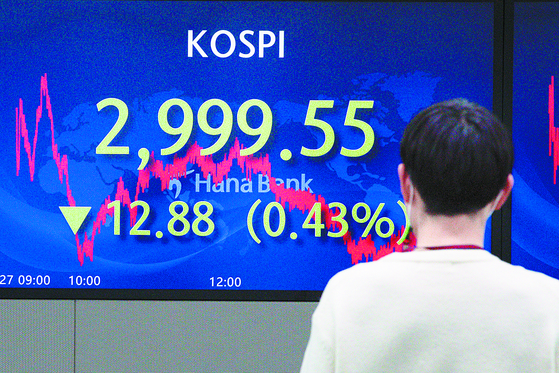 An investor looks at an electronic board in a dealing room at Hana Bank in Seoul on Dec. 27, when the Kospi fell below the 3,000 mark, a 0.43 percent drop from the day before. [NEWS1]

Stocks were the opposite. Expectations for continuing successes of companies and growth of Korean economy were beaten by fears. Due to the U.S.-China hegemony war and decoupling and concerns for major industries, no new formula or ideas to grow our economy were presented. As a result, foreigners sold 26-trillion-won ($21.9 billion) worth of stocks this year alone. It is the most since 2008, when the country was hit by the global financial crisis.

Presidential candidates became desperate about the disappointing performance of the stock market, as individual investors mostly in their 20s and 30s invested nearly 77 trillion won in domestic stocks this year alone.

Democratic Party (DP) presidential candidate Lee Jae-myung took the first step to please individual investors. In a YouTube video broadcast Saturday, Lee said, “It is not that hard to achieve a 5,000-point Kospi. If I become the president, my main focus is growing the capital market, and that is a way to increase national wealth.”

It reminds me of the remarks Lee Myung-bak made shortly before the 2007 presidential election. At the time, Lee, then presidential candidate of the Grand National Party, said, “If the economy is performing normally, the Kospi will rise to 3,000 in one year. Within five years of my term, it will be natural for the index to reach 5,000.”

About the skyrocketing real estate prices, Lee Jae-myung said, “Faults in policy were the main reason.” He even went further, saying, “If the market thinks supply is lacking, the government should have acted to increase the supply, but it denied the market’s demand.” To win the votes of the centrists, he positioned himself as a promoter of “marketism.”

Opposition People Power Party (PPP)’s candidate Yoon Suk-yeol followed suit. In a press conference on Monday, he pledged to improve fairness in the stock market by abolishing the securities transaction tax and changing the system that is disadvantageous to individual investors.

The Moon administration also presented some measures. It said the government will make a fresh attempt next year to get its stock market included in the MSCI World Index representing advanced economies. Korea has remained on the MSCI Emerging Markets Index. The government wants to resolve undervaluation of Korean market by attracting stable investments in advanced economies, rather than unpredictable investments in emerging markets.

The direction is appropriate, but it seems like a face-saving measure since it was announced with less than six months left in Moon’s term.

Furthermore, the global surges of liquidity are about to stop. It is unclear what turmoil will hit the financial market when the United States raises the benchmark rate and start tapering next year. Experts warn that Kospi won’t be able to maintain 3,000 next year and the biggest challenge will be preventing a hard landing.

During Lee Myung-bak’s presidency, the market situation actually went in the opposite direction though he promised the Kospi would go up to 5,000. After Korea was hit by the global financial crisis in the first year of Lee’s term, the Kospi plummeted to 900. It managed to recover to 2,000 after a few years.