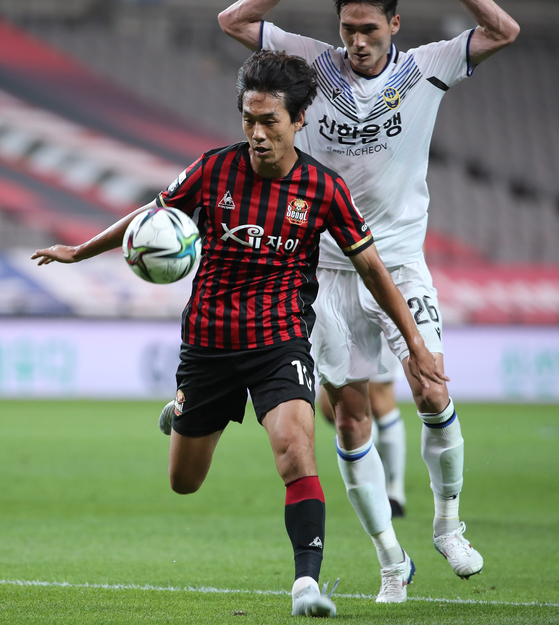 
Park Chu-young will part ways with FC Seoul after playing with the club for 10 years.

“We negotiated with Park to renew his deal but reached a difference in our positions,” FC Seoul announced Tuesday.

As Park’s contract expired at the end of the season, Seoul negotiated with Park in hopes that he would pursue a coaching career with the club, but Park expressed his intention to continue as an athlete.

Park joined FC Seoul in 2005 and became a franchise star right away, winning the Rookie of the Year award after scoring 18 goals.

Park’s performance on the national team and the Seoul club for four seasons led him to a career overseas. He joined Ligue 1 side AS Monaco in 2008 where he played until 2011. Later that year, Premier League club Arsenal signed Park, and, after stints in France, England, Spain and Saudi Arabia, Park returned to FC Seoul.

With the Seoul club, Park scored 90 goals in 314 matches and led the team to the K League title in 2016, scoring the winning goal against the Jeonbuk Hyundai Motors in the finals.

Before Seoul announced Park's departure, Park had himself announced his departure on Dec. 15 on his social media, revealing that after three meetings with the club staff, the club staff offered him a position to coach the youth club, and he decided to part ways with the Seoul club.

“We want to pay our respect and gratitude to Park for always being there for the club, and will support Park in all his future endeavors,” announced FC Seoul on Tuesday.

FC Seoul appointed Cha Du-ri as the U-18 team manager on Tuesday. Cha will be in charge of recruiting and training the FC Seoul Youth system that includes the U-12 team, the U-15 team and the U-18 Osan high school team.

Cha rounded off his career as an athlete in FC Seoul in 2015 when he led the club to a FA Cup trophy as the captain. After retiring, he started his coaching career. After coaching the national team, he took over as the coach of the FC Seoul U-18 Osan high school club in 2019. Since then, he has coached Osan high for two years, winning the 2020 K League Junior Group A title among others.