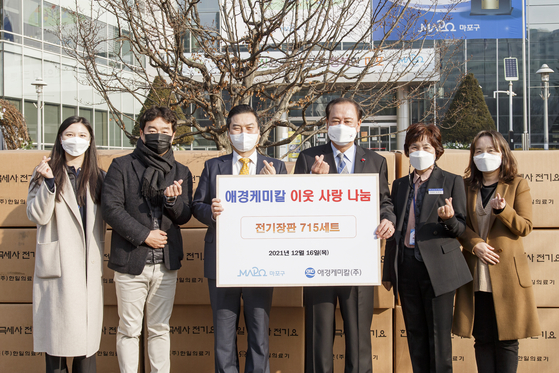 The company delivered 715 electric blankets to promote neighborliness. Mapo District Office will distribute them to the underprivileged to help them stay warm during the winter.

The company plans to improve business structure and strengthen its growth engines in a bid to achieve 4 trillion won ($3.3 billion) in sales and 300-billion-won operating profits by 2030, and to establish an environment, social and governance management system.

Aekyung Chemical relocated its headquarters to Aekyung Tower in Mapo-gu, and has a factory in Ulsan, its Cheongyang 1 and 2 factories, a Daejeon laboratory, a Jeonju factory and a central district distribution center in Pyeongtaek. Moreover, the company has subsidiaries both at home and abroad such as Aekyung Paint and Aekyung HongKong.

“We will pay attention to corporate social responsibility and continue to make various social contributions,” an official at Aekyung Chemical said, adding that the company will continue the donation event at its Nam-gu Office in Ulsan, Cheongyang County Office and Yusong District Office in Daejeon.

Aekyung Chemical has practiced its management philosophy of “love and respect” by hosting a range of charity events such as rice donation events and kimchi sharing.