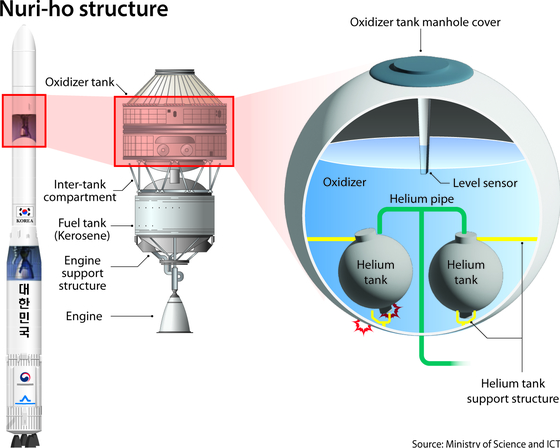 The failure of a Korean rocket's payload to stay in orbit in October was due to a faulty design of an oxidizer tank, which led to the shutting down of the third-stage engine, the Ministry of Science and ICT said.

On Wednesday, the ministry and the Korea Aerospace Research Institute (KARI) released the conclusions of a postmortem of the launch of the Korea Space Launch Vehicle-II (KSLV-2), also known as the Nuri-ho, on Oct. 21.

Though the launch was a major milestone in Korea’s efforts to develop its own space technology, the mission wasn't a complete success as a dummy satellite was not placed into a stable orbit as planned.

The rocket hit its target altitude of 700 kilometers (435 miles) above the Earth, but a last-minute malfunction of the 7-ton third-stage engine occurred. It failed to complete the 521 seconds combustion needed for the dummy payload to remain in its targeted orbit, shutting off 46 seconds too soon.


According to the study, the support structures holding helium tanks inside the third-stage oxidizer tank were not properly designed to account for a force referred to as buoyancy.

Buoyancy, the upward force exerted by a fluid that pushes an object, rises along with a rocket’s altitude, which was not accounted for.

“We apologize for not anticipating the rising buoyancy that occurred in Nuri-ho’s acceleration process,” said Choi Hwan-seok, vice president of KARI and leader of the investigative team. “We will correct the issue by fortifying the helium tank anchors and the oxidizer tank’s structure.”

That will mean a postponement of a second launch scheduled for May to the latter part of next year.