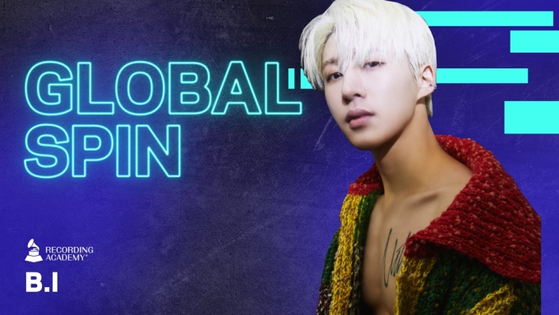 B.I. will feature on the Grammys' ″Global Spin″ on Jan. 4. [GRAMMYS GLOBAL SPIN]

According to the Grammys on Wednesday, B.I. will be the first K-pop artist to make an appearance on the biweekly show.

The organization said it decided to premiere “Global Spin” on Sept. 28.

Each episode of "Global Spin" features a performance from a notable artist or group and “celebrates both the creators and their home countries,” according to the Grammys. It can be watched via the Recording Academy’s official YouTube channel, Facebook page, Instagram and Twitter profile.

It remains unknown which song B.I. will perform, however, fans are anticipating that it’s highly likely that it will be the lead track from his latest album “Waterfall,” which was released on June 1. The release marked his first regular album since his debut seven years ago.

Time Magazine recently picked 10 albums it believes to be the best of K-pop this past year and B.I.’s “Waterfall” was named first on the list.

B.I., a former iKON member was given a three-year suspended prison sentence and four years of probation for illegal drug use on Sept. 10. He was found guilty of smoking marijuana and purchasing and using LSD in 2016. He left iKON in June 2019 following reports of his illegal drug use and his contract with YG Entertainment was terminated accordingly.