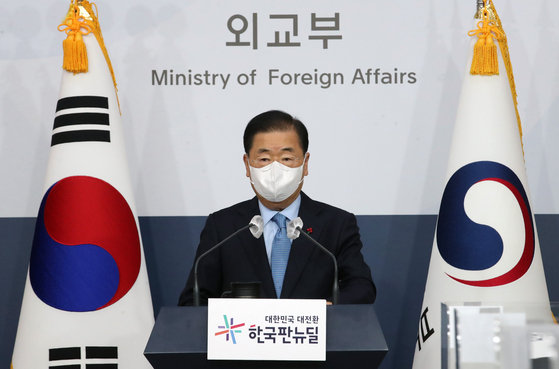 
Seoul and Washington have effectively agreed on a draft text for a declaration to end the 1950-53 Korean War amid ongoing efforts to bring Pyongyang back to the dialogue table, said Foreign Minister Chung Eui-yong Wednesday.

"Regarding an end-of-war declaration, South Korea and the United States already share an understanding on its importance, and the two sides have already effectively reached an agreement on a draft text," said Chung said in a press conference at the South Korean Foreign Ministry in central Seoul.

South Korea's top diplomat added that he and U.S. Secretary of State Antony Blinken "reaffirmed" this notion when they met on the sidelines of a Group of Seven (G7) ministerial meeting in Liverpool, England, over Dec. 11 and 12.

Chung however acknowledged that despite expectations that the Beijing Winter Olympics next February could be used as a venue to improve inter-Korean relations, such prospects are getting more difficult.

Seoul officials in recent weeks indicated that South Korea and the United States have made significant progress on the draft text of an end-of-war declaration and were in the final stages of negotiations over the proposal. However, this is the first time that a high-ranking official publicly confirmed that the end-of-war discussions with Washington are virtually completed.

Getting Pyongyang on board is another matter, and Chung admitted they are "considering various ways on how to advance consultations with North Korea."

In September, President Moon Jae-in proposed that the two Koreas, the United States, and possibly China, formally declare an end to the Korean War, which ended with an armistice agreement rather than a peace treaty, in his address to the United Nations General Assembly.

This prompted a series of talks between South Korean and U.S. officials in the following weeks to discuss Seoul's end-of-war proposal to bring Pyongyang back to denuclearization talks.

The armistice agreement signed by the U.S.-led UN Command, North Korea and China on July 27, 1953, only brought a complete ceasefire to hostilities. Thus, the two Koreas remain in a technical state of war.

Chung told reporters, "We hoped that the Beijing Olympics would be used as an opportunity to improve inter-Korean relations, but I think that currently such expectations are getting slimmer."

The Covid-19 pandemic could prevent North Korea from sending a delegation to Beijing. The International Olympic Committee in September banned North Korean athletes from participating in the Winter Olympics for skipping the Tokyo Games this summer over fears of Covid-19.

The United States at the beginning of the month declared a diplomatic boycott of the Beijing Olympics in protest of China's human rights issues, meaning it will not send an official delegation to the Winter Games. This put a further damper on Seoul's vision of the Winter Games being an opportunity for the different countries to gather together to revive dialogue with Pyongyang, reminiscent of the PyeongChang Olympics in 2018.

Chung reaffirmed to reporters that Seoul is "not reviewing a diplomatic boycott of the Beijing Olympics," and took it a step further, saying that the government is "considering in what form it can partake in it" when asked what sort of delegation will attend the Games. He skirted a question on whether Chinese President Xi Jinping has extended an invitation to Moon to attend the opening ceremony of the Olympics.

"North Korea has shown a speedy and positive response to the proposal for an end-of-war declaration," said Chung. "However, we are expecting a more specific reply."

He continued, "The government will use every opportunity do its utmost to improve inter-Korean relations and restart the peace process on the Korean Peninsula at an early date without giving up hope until the very end."

Addressing the ongoing Sino-U.S. tensions, Chung said, "It is very clear we continue to communicate our stance to both the United States and China, and it is our government's judgment that we will continue to develop our relations with China relations based on the Republic of Korea-U.S. alliance."

Moon in a press conference in Australia on Dec. 13 said that the United States, China and North Korea agree "in principle" on declaring a formal end to the Korean War.

The president, however, noted that an end-of-war declaration "is not in itself the ultimate goal" and can "serve as a starting point from which negotiations on denuclearization and a peace regime can begin in earnest."

Bruce Klingner, a senior fellow at the Washington-based think tank Heritage Foundation and a former CIA deputy division chief for Korea, told Axios Tuesday that Kim Jong-un could find a way onto Biden's agenda next year through a major provocation, a charm offensive, or a combination of the two, potentially ahead of the South Korean election in March.

He said there could be a "February or March surprise" before the presidential election which could include a summit on the sidelines of the Beijing Olympics, a bilateral meeting with Moon or a trilateral meeting involving China and excluding the United States.