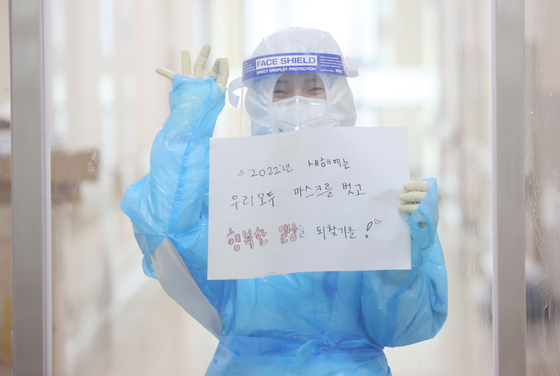 A medical worker holds up words of encouragement and new year wishes at a Covid-19 isolation ward at the Armed Forces Capital Hospital in Seongnam, Gyeonggi, Wednesday. Her sign reads: “I wish in the new year in 2022, we will be able to take off our masks and return to our happy daily lives.” [YONHAP]


Korea's Omicron cases hit a daily record of 109 Wednesday, reaching triple digits for the first time, while the number of critically ill patients in the country also soared to a new high of 1,151.

This marks the ninth consecutive day critically ill patients stayed above 1,000. Daily Covid-19 cases surged to over 5,000 after dropping to below 4,000 Tuesday for the first time in nearly a month.

Health authorities warned that despite indicators of an overall downward trend in infections recently, the Omicron variant was becoming the dominant strain in the country.

Prime Minister Kim Boo-kyum said in a Covid-19 response meeting, "Infections of the [Omicron variant] have been confirmed across the country. There is a high likelihood that Omicron will become the dominant strain here in Korea in the near future."

Korea now has a total of 558 reported Omicron cases.

Of the latest Omicron cases, 69 were imported and 40 were domestically transmitted, according to the Korea Disease Control and Prevention Agency (KDCA).

There were 46 Omicron infections from the United States, while others were from Britain, Nigeria, Ethiopia, Canada and Hungary, reflecting the variant's spread globally.

Studies have shown the Omicron variant spreads three times faster than Delta, which was much more transmissible than the original strains.

Kim noted that "while some people are optimistic that this variant doesn't lead to as many critically ill patients," he warned against "letting down our guard."

He added, "Even if the hospitalization rate is cut by half, if confirmed cases double, the burden on medical responders will eventually even out." 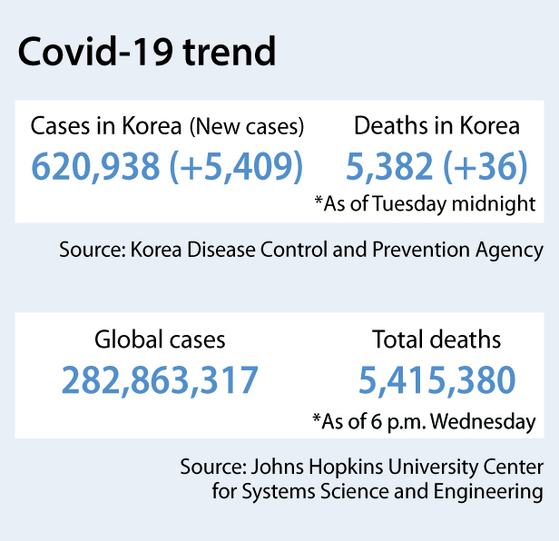 There was a 78.7 percent I.C.U. bed occupancy rate in the greater Seoul area as of 5 p.m. Tuesday, a slight drop from the previous day's 81.1 percent. The I.C.U. capacity nationwide was slightly lower at 74.8 percent.

However, there were no patients on standby for an I.C.U. bed as of Wednesday, the first time since early November.

Korea will extend its special travel measures to prevent the inflow of the Omicron variant for four more weeks until Feb. 3, through the Lunar New Year holiday.

Health authorities said Korea will maintain the current mandatory 10-day quarantines and self-isolations for all international arrivals and entry bans on short-term travelers from 11 countries, including South Africa, Mozambique and Ethiopia.

The government will also temporarily suspend sales of new airplane tickets to Singapore, a country with a travel bubble agreement with Korea, until Jan. 20.

The government is considering extending the current social distancing restrictions for another two weeks from Jan. 2 in consideration of the spread of the Omicron variant and the high number of critically ill patients.

"The number of Omicron infections is increasing relatively slowly in Korea compared to other countries, but it is not easy to predict when the transmission rate will accelerate," said Son Young-rae, head of the social strategy division at the Central Accident Resolving Headquarters, in a briefing Wednesday. "It may be delayed as much as possible, but ultimately, it will be difficult to avoid Omicron replacing Delta and becoming the dominant strain in Korea."

He noted that the Omicron variant is become the dominant variant in other countries within a month or so, with cases doubling or even tripling.

The country now has a new Korean-made polymerase chain reaction (PCR) test that can detect the Omicron variant within three to four hours to be available for use by local governments nationwide from Thursday.

The Korean military Wednesday confirmed its first cases of the omicron variant among personnel. An officer serving in a Defense Ministry unit in Daejeon and two conscripts serving at Osan Air Base in Gyeonggi tested positive for Omicron, prompting concern over a possible cluster of infections in the military.

The military confirmed all three Omicron cases were breakthrough infections, though the officers are said to have mild symptoms.